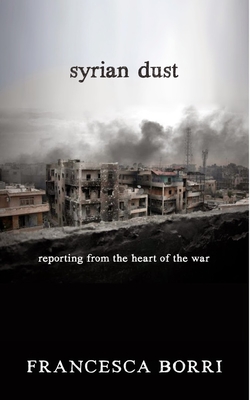 Reporting from the Heart of the War

August 21, 2013: a chemical weapons attack on the suburbs of Damascus reminds the world of the existence of the Syrian war. Hundreds of journalists from every corner of the world rush to the frontier only to leave disappointed when Obama decides not to bomb. They leave behind 200,000 estimated victims, and more than half of a population of 22 million people dispersed or refugeed in nearby countries: the worst humanitarian crisis since WWII according to the UN.

Francesca Borri is one of them. But she does not leave. She is thirty years old. For months she covers the battle of Aleppo as a freelance reporter. And she quickly realizes that to report a war is to hide with dozens of women and children, even a baby, born there, in a grave, 'a piece of soil under the ground that is as expensive as three houses' or to scavenge for anything to burn for some warmth, 'a broken slipper, the plastic hand of a toy' or to mistake bloody figments of skull for rubble. To report a war is also to meet with officials more worried about the stain of snow on their Clarks than the people they are supposed to help. It is to explain what is happening in Aleppo to journalists who have only been there once, on vacation, and bought a carpet. It is risking one's life because of the jealousy of a fellow reporter. And it is also about dreaming of driving at night with the windows open, about remembering impossible little things, the particular light on that day in that café at the beach when you were a kid, the eyes of people you love, all the minuscule simple joys that can be lost in a moment.

Syrian Dust is a raw and powerful account of the Syrian war that throws the reader right in the middle of it, without any shelter.

Praise For Syrian Dust: Reporting from the Heart of the War…

"There is no greater nor more harrowing drama on our watch than the slow death of the great city of Aleppo. But very few have the courage and will to go there and bear witness to the abuse of power and violence, and the endless suffering of the innocent. Francesca Borri has done what we, the news organizations, the diplomats, and the aid groups have failed to do: documenting, for the present and the future, the naked truth of how we still fail to protect and assist hundreds of thousands of men, women, and children in the ancient city of Aleppo." —Jan Egeland, Norwegian Refugee Council

"Francesca Borri’s work is a brutal poetry of witness. Combining factual reportage with emotionally devastating prose she pulls the reader deep into the trauma of Syria with unmatched skill and a necessary cynicism."  —Omar Robert Hamilton, filmmaker

“In this harrowing account of the Syrian Civil War, Italian journalist Borri describes the grim year she spent in Aleppo, having arrived a year after the 2011 uprising began. ... There is good journalism here, which falls under the heading of an intrepid reporter going to war: a vivid, but often impressionistic—even stream-of-consciousness—account of death-defying adventures on Syrian battlefields during which Borri shares the miseries of her subjects and the terrible destruction and loss.” —Publishers Weekly

FRANCESCA BORRI was born in Italy in 1980. She holds a Master's in International Relations, a Master's in Human Rights, and a Bachelor's in Philosophy of Law. After a first experience in the Balkans, she worked in the Middle East as a human rights officer. She turned to journalism in February 2012 to cover the war in Syria. She is the author of three books, on Kosovo (2008), Israel and Palestine (2010), and Aleppo (2014).
Loading...
or
Not Currently Available for Direct Purchase