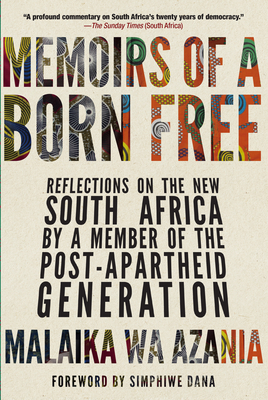 Memoirs of a Born Free

Apartheid isn't over—so Malaika Wa Azania boldly argues in Memoirs of a Born Free, her account of growing up black in modern-day South Africa. Malaika was born in late 1991, as the white minority government was on its way out, making her a "Born Free"—the name given to the generation born after the end of apartheid. But Malaika's experience with institutionalized racism offers a view of South Africa that contradicts the implied racial liberation of the so-called Rainbow Nation. Recounting her upbringing in a black township racked by poverty and disease, the death of a beloved uncle at the hands of white police, and her alienation at multiracial schools, she evokes a country still held in thrall by de facto apartheid. She takes us through her anger and disillusionment with the myth of black liberation to the birth and development of her dedication to the black consciousness movement, which continues to be a guiding force in her life. A trenchant, audacious, and ultimately hopeful narrative, Memoirs of a Born Free introduces an important new voice in South African—and, indeed, global—activism.

Praise For Memoirs of a Born Free: Reflections on the New South Africa by a Member of the Post-apartheid Generation…

“By forcefully interrogating the problematic notion of the Rainbow Nation, and by daring to address the broken promise of an ANC in dire need of strong leadership, Memoirs of a Born Free is a must read—a book that reveals just how inadequate political freedom without socio-economic freedom truly is.” —Independent Online (South Africa)

“In a South Africa that had already declared itself to be post-apartheid, the image of racial integration and progress put forward by the current government is torn apart by the current generation. Living within structures still ravaged by institutional disparity, the image of the 'rainbow nation' is belied by the lived experienced dutifully expounded in this first long-form work by an activist voice of contemporary change for black consciousness.” –World Literature Today

MALAIKA WA AZANIA, real name Malaika Lesego Samora Mahlatsi, was born in Meadowlands, Soweto, in 1991, before moving to Dobsonville Extension 2 in her late teens. She is the former branch secretary of the South African Students Congress at Rhodes University, where she is currently pursuing a master’s degree in geography after obtaining her honors degree cum laude. Malaika is the former secretary general of the African Youth Coalition, an umbrella body of youth civil society organizations established in 2013 by the Thabo Mbeki Foundation. She is the former African Union African Youth Charter ambassador for the Southern African Development Community region and the executive director of her own writing and transcribing company, Pen and Azanian Revolution (Pty) Ltd. In 2012, she founded a pan-Africanist journal, Afrikan Voices of the Left, dedicated to the memory of Pan Africanist Congress founding president Robert Sobukwe. Malaika is a published essayist, a blogger, a former television co-host, and a columnist. She previously wrote for Thought Leader, the Sunday Independent, and the African Independent, and was a contributing writer to the Thinker magazine. Voted as one of the Mail & Guardian’s Top 200 Young South Africans, Malaika is a committed social justice activist and public intellectual. She is currently based in Pretoria and works for the South African government.

SIMPHIWE DANA is a Xhosa singer and songwriter whose distinctive style fuses jazz, Afro-soul, and traditional music. Called “the best thing to happen to Afro-Soul music since Miriam Makeba” by South African media, she is also a prominent activist and the first African ambassador for Amnesty International.
Loading...
or
Not Currently Available for Direct Purchase