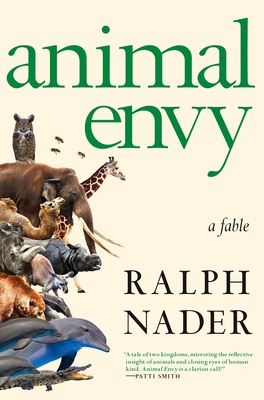 Ralph Nader's newest work of the imagination, Animal Envy, is a fable about the kinds of intelligences that are all around us in other animals. What would animals tell us—about themselves, about us—if there were a common language among all animal species? A bracingly simple idea, one that has been used before in books like George Orwell's Animal Farm and E. B. White's Charlotte's Web among others, but never like this. In Animal Envy, Ralph Nader proposes, quite plausibly, that a programmer has created a "digital translation" app whereby animals of different species, from insects to whales, can speak to one another, and through a "hyper-advanced converter" these animals can then also speak, both collectively and individually, to humans. It is decided that there will be a global assembly. It will be called "The Great Talkout." Humans are persuaded to reserve 100 hours of network coverage so The Great Talkout may begin and will be viewed by humans everywhere, in all human languages, as well as all animal languages.
The narrative that ensues is deeply felt and powerfully informed. Just as he did when he wrote Only the Super-Rich Can Save Us, Nader shows here that his visionary genius knows no limits.

Praise For Animal Envy: A Fable…

"A tale of two kingdoms, mirroring the reflective insight of animals and closing eyes of human kind. Animal Envy is a clarion call!" —Patti Smith

"It's good to see Ralph Nader turning his attention to the way we treat animals.  Whether you love or hate the unusual framework he has chosen, the ideas he presents are important and demand our attention." —Peter Singer, professor of bioethics, Princeton University, and author, Animal Liberation

"Using results from research on the cognitive and emotional lives of animals, Mr. Nader weaves in plausible stories of what we can learn about their agenda if we take the time to talk with and listen carefully to them. All in all, Animal Envy is a highly original and visionary book that made me think deeply about human-animal relationships and how they must change as other animals plea for less violence and appeal for compassionate coexistence in the Anthropocene, an epoch that truly has become the rage of humanity." —Marc Bekoff, author of The Animals' Agenda: Freedom, Compassion, and Coexistence in the Human Age (forthcoming, Beacon Press)

"In his original and visionary book Animal Envy: A Fable, political activist, author, lecturer, and attorney Ralph Nader wrote about what he called "The Great Talkout." By using a digitally converted language that is understandable across species, diverse nonhuman animals—from insects to whales—are able to communicate with one another and also with human animals. In this global assembly, a panoply of animals not only tells us who they really are and what they want and need to flourish, but also show how they can be of great benefit to us—a win-win for all. Mr. Nader also notes the dangers of zoonotic diseases being transmitted to humans." —Psychology Today

"As to be expected from a book by Ralph Nader, Animal Envy is hard to pigeonhole—being equal parts science fiction, philosophy, science and nature reporting, tragedy, and comedy.  What is clear is that the book provides a wildly imaginative, illuminating, often hilarious (and sometimes politically incorrect) look at the fraught relationship between humans and the fellow creatures with whom we tenuously share a fragile home.  Most important, the book is a desperate plea (from the animals themselves) that we change that relationship before it is too late for both them and us." —Eric R. Glitzenstein, animal and environmental attorney, and co-founder of Meyer, Glitzenstein & Eubanks LLP

"Ralph Nader brings all of his formidable integrity and intelligence to this most important discussion of all: relations between humans and the rest of the world. We humans owe Nader a deep thank you for creating this crucial and far-reaching book." —Derrick Jensen, author of The Myth of Human Supremacy

"The thing that makes Nader’s tale distinctive is the degree of knowledge and insight he demonstrates about animal welfare issues today. Animal Envy reveals its author as a keen observer of contemporary developments in the field, and an avid consumer of current news and information concerning animals, their capacities, their status, and their suffering..... I think it is tremendous that Nader, who at 83 is still in the heart of the fight to make America a better and stronger nation, has made his commitment to animal protection more public with Animal Envy. He hopes to see the work read and embraced by a universal audience, people of all ages and backgrounds, in the United States and abroad. That’s my hope, too." —Wayne Pacelle

Named by the Atlantic as one of the hundred most influential figures in American history, and by Time and Life magazines as one of the hundred most influential Americans of the twentieth century, RALPH NADER and the dozens of citizen groups he has founded have helped us drive safer cars, eat healthier food, breathe better air, drink cleaner water, and work in safer workplaces. Nader continues to be a relentless advocate for grassroots activism and democratic change. With Animal Envy, he is raising the stakes yet again with a book that could restore America to itself once and for all.
Loading...
or
Not Currently Available for Direct Purchase