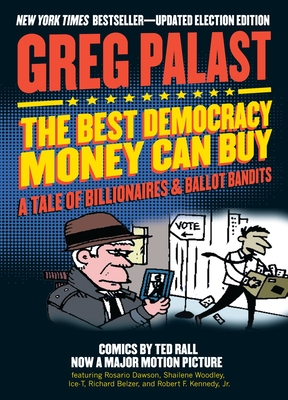 A Tale of Billionaires & Ballot Bandits

A close presidential election in November could well come down to contested states or even districts--an election decided by vote theft? It could happen this year. Based on Greg Palast and Robert F. Kennedy Jr.'s investigative reporting for Rolling Stone and BBC television plus new reporting by Palast for the new edition—a portion of which will be a Rolling Stone cover story, covered in major progressive media outlets which will include radio, television, and webcasts, and featured on listservs from important civil rights and activist organisations—The Best Democracy Money Can Buy: A Tale of Billionaires & Ballot Bandits will be the most important book published this year—one that could save the election.

The documentary film of The Best Democracy Money Can Buy is available on DVD from CinemaLibre Studio.

Bestselling author GREG PALAST's most recent book is Vulture's Picnic. Author of a number of previous bestsellers, including Armed Madhouse, Greg Palast is currently a Nation Institute Fellow and BBC correspondent. He lives in New York City and Long Island. ROBERT F. KENNEDY JR. is the dean of the Pace University School of Environmental Law, chairman of the Riverkeeper Alliance, an attorney representing victims of voting rights violations, and contributing editor to Rolling Stone magazine. TED RALL's political and social commentary cartoons have appeared in hundreds of publications, including Rolling Stone, Time, Fortune, the Washington Post, the Los Angeles Times, Village Voice, and New York Times. A finalist for the Pulitzer Prize, he has twice won the Robert F. Kennedy Journalism Prize. Visit him at Rall.com.

Praise For The Best Democracy Money Can Buy: A Tale of Billionaires & Ballot Bandits…

"The Best Democracy Money Can Buy is a searing indictment of a rigged electoral system where hundreds of thousands of people of color are routinely denied the right to vote.  Palast, one our great investigative reporters, exposes one of the many mechanisms the corporate state uses to keep us enslaved.  If you are not outraged by what Palast has uncovered you have no heart." —Chris Hedges

"There's a specific kind of outrage that I think only the work of Greg Palast can evoke. It is the outrage when we realize our democracy is being taken away from us. And that there isn't anyone in the mainstream media aside from Greg Palast reporting on this with any reliability or accuracy or passion or intelligence—and that is itself a crime." —Josh Fox, writer and director of Gasland
or support indie stores by buying on
Copyright © 2020 American Booksellers Association