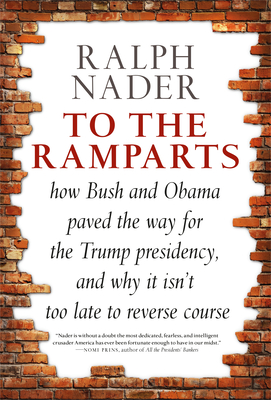 America’s number one citizen Ralph Nader’s latest
book shows us how unchecked corporate power has led to the wrecking
ball that is the Trump presidency. Nader brings together the outrages
of the Trump administration with the key flaws and failures of the previous
administrations—both Republican and Democratic—that have
led our nation to its current precipice. It’s all in the details and Ralph
Nader knows them all. Trump didn’t come out of nowhere. Bush and
Obama led the way. Writing as a Washington, DC, activist and people’s
advocate for over fifty years―someone who has saved more lives and
caused more impactful legislation to be enacted than almost any sitting
president or legislator—Nader shows how Trump’s crimes and misdemeanors
followed the path of no resistance of the Obama, Bush and
Clinton regimes, which ushered in the extreme rise of corporate power
and the abandonment of the poor and middle classes.

Praise For To the Ramparts: How Bush and Obama Paved the Way for the Trump Presidency, and Why It Isn't Too Late to Reverse Course…

"For a half century Ralph Nader has said what he thinks, written what he believes, and told it like it is—even to presidents." —Robert B. Reich, chancellor's professor of public policy, University of California at Berkeley

"Ralph Nader is without a doubt the most dedicated, fearless, and intelligent citizen crusader America has ever been fortunate enough to have in our midst." —Nomi Prins, author of All the Presidents' Bankers

Born in Connecticut in 1934, RALPH NADER has spent his lifetime challenging corporations and government agencies to be more accountable to the public. His 1965 book Unsafe at Any Speed permanently altered the course of a reckless U.S. automobile industry and made Nader a household name. His lobbying and writing on the food industry helped to ensure that the food we buy is required to pass strict guidelines before reaching the consumer. One of Nader's greatest achievements was his successful lobbying for a 1974 amendment to the Freedom of Information Act, which gave increased public access to government documents. Over the years he has co-founded the public interest groups Public Citizen, Critical Mass, Commercial Alert, and the Center for the Study of Responsive Law. His 2000 presidential campaign on the Green Party ticket served to broaden the scope of debate on the nation's priorities. Named by the Atlantic as one of the hundred most influential figures in American history, Nader continues to be a relentless advocate for grassroots activism and democratic change. He lives in Washington, D.C.
Loading...
or
Not Currently Available for Direct Purchase