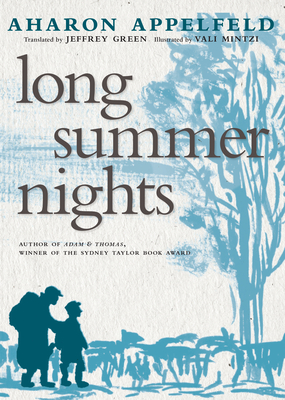 The second and last children's book by the extraordinary Holocaust survivor and Hebrew-language author of the award-winning Adam & Thomas.

A mystical and transcendent journey of two wanderers, an eleven-year-old boy and an old man to whom the boy has been entrusted by his father, a Jew, fleeing the ravages of the war by the late award winning author, Aharon Appelfeld. The old man is a former Ukranian commander, revered by the soldiers under his command, who has gone blind and chosen the life of a wanderer as his last spiritual adventure. The child, now disguised as a Ukranian non-Jew, learns from the old man how to fend for himself and how to care for others. In the tradition of The Alchemist, the travelers learn from each other and the boy grows stronger and wiser as the old man teaches him the art of survival and, through the stories he shares, the reasons for living. Long Summer Nights carries its magic not only in the words, but also in the silences between them.

"Appelfeld (1932-2018) was a master storyteller, and his approach here resembles that of Isaac Bashevis Singer. But there is also a kind of naivete—Yanek does not quite understand what has happened to his parents and grandfather—that is reminiscent of Morris Gleitzman’s Once trilogy. While Grandpa Sergei instructs Yanek to wear a cross to protect himself against anti-Semitic harm, the danger they both face is prejudice against wanderers. The illustrations are strong yet stark and add to representation of the wanderers’ existence. This book adds a simple yet unexpected depth to the cadre of Holocaust refugee narratives. It offers memorable characters and little-known experiences. It could become a new favorite." -Barbara Krasner, Association of Jewish Libraries newsletter

"[A] poignant tale of loss and survival."-Publishers Weekly

"This haunt­ing account of a young Jew­ish boy in World War II Ukraine embod­ies both myth and his­to­ry. . . . The sub­tle­ty with which Appelfeld avoids com­fort­ing con­clu­sions about human inde­struc­tibil­i­ty in the face of evil is one of the most pro­found achieve­ments of this novel. . . . .Although Long Sum­mer Nights is not a pic­ture book, Vali Mintzi’s illus­tra­tions — inter­spersed through­out the text — are an essen­tial com­ple­ment to Appelfeld’s text. Drawn in the style of char­coal sketch­es, they cap­ture the link between human beings and nature which reflects Yanek and Grand­pa Sergei’s life in the coun­try­side. Peo­ple are dark sil­hou­ettes or have min­i­mal­ly defined fea­tures, lend­ing a folk­loric qual­i­ty to this tale of the lost world pre­served in Appelfeld’s poet­ry of anguish and love. Long Sum­mer Nights is high­ly rec­om­mend­ed for both chil­dren and adults." -Jewish Book Council

Aharon Appelfeld (1932 - 2018) was deported to a concentration camp in Transnistria when he was eight-years-old, during World War II, but escaped and wandered the forests for three years. In 1944, he was picked up by the Red Army, served in field kitchens in Ukraine, then made his way to Italy, and then Palestine. He has won numerous prizes and in 2015 his first book for young readers, Adam & Thomas, won the Sydney Taylor Book Award, was a National Jewish Book Award finalist, and was a 2016 ALA Mildred E. Batchelder Honor Book.

Jeffrey M. Green began to translate for Aharon Appelfeld in the 1980s and has translated a dozen or so of his novels. Green is the author of Thinking Through Translation, as well as short stories, poems, novels, book reviews, and essays.