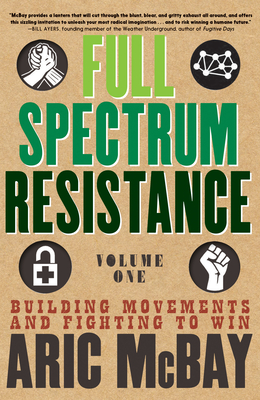 Building Movements and Fighting to Win

A guide to direct action for those disillusioned with the posturing of liberal “activism.”

The radical left is losing, but it doesn’t have to be that way. Here is the radical’s guide to activist work—the manual we need at this crucial moment to organize for universal human rights, a habitable earth, and a more egalitarian society.

Thoroughly exploring the achievements and failures of radical movements throughout history—from 19th-century anti-colonial rebellions in China and the environmental actions of First Nations and Native American tribes throughout the 20th century, to Black Lives Matter and the fight for Gay Liberation—the two volumes of Full Spectrum Resistance candidly advocate for direct action, not just risk-averse models of protest marches and call-ins. With in-depth histories and case studies of social justice and environmental movements, noted writer, activist, and farmer Aric McBay explains why passive resistance alone cannot work, and how we must be prepared to do whatever it takes to create substantial social change.

In Volume 1: Building Movements and Fighting to Win, McBay describes the need for resistance movements, and paints a portrait of what a thriving resistance movement might look like today. Citing successful movements such as the Deacons of Defense of the American Civil Rights Movement, the anti-colonial revolutions in Guinea and Cape Verde, and activist groups like Act-UP, McBay deftly illustrates how to organize activist groups and encourage enlistment, while also noting the necessary precautions one must take to secure these radical circles from infiltration and collapse.

Praise For Full Spectrum Resistance, Volume One: Building Movements and Fighting to Win…

"Aric McBay begins his newest work Full Spectrum Resistance with the words: 'I wrote this book because we are losing,' and, indeed, he presents a long list of global losses and failures in the realm of the environment, Indigenous sovereignty, women's rights, class struggle, racism and more. However, as McBay melds together meticulous research into resistance movements past and present and a lifetime of activism of many kinds, he paints what is, more than anything, a picture of hope. He notes, near the beginning of volume one that 'we fight because it is right' and, towards the end of volume two that 'we can fight and we can win.' McBay's message of activism and community building is one that should inspire all people concerned about the future of this planet to, in his words: 'fight together for a future worth living in.'" -Pamela Cross, feminist lawyer and activist

"Full Spectrum Resistance is more than a comprehensive guide and a helpful handbook—it’s a red-hot torch capable of scorching the banal platitudes and old orthodoxies of the Left as it lights a path forward for those whose object is to win. Aric McBay draws hard-earned lessons from decades of activism and organizing, inquiry and study, building and sustaining social movements, winning and (importantly) losing campaigns and battles, and crafts a smart and passionate argument for the gathering resistance. For anyone who understands the urgency of the catastrophe we’re facing and is in search of an antidote to despair or resignation, McBay provides a lantern that will cut through the blunt blear and gritty exhaust all around, and offers this sizzling invitation to unleash your most radical imagination, to dive into the wreckage, and to risk winning a humane future." -Bill Ayers, founding member of the Weather Underground, author of Fugitive Days, Public Enemy, and Demand the Impossible: A radical manifesto.

"Aric McBay's Full Spectrum Resistance, Volumes One & Two are must reads for those wanting to know more about social movement theory, strategies and tactics for social change, and the history and politics of activism and community organizing. There is nothing within the realm of social justice literature that is close to the breath about modern social movements than these books. These are engaging, critical, exciting and outstanding intersectional books that respectfully speak about the pitfalls and successes for social change. They're perfect for an introduction to peace studies or intersectional social justice class and touch on everything from Black and queer liberation, to prison abolition and animal rights." -Dr. Anthony J. Nocella II, Assistant Professor of Criminology and Co-editor of Igniting a Revolution: Voices in Defense of the Earth

"Full Spectrum Resistance is the most thorough, intelligent, and contemporary handbook on how to change everything that exists, to my knowledge. If you're just now figuring out that all that letter-writing and voting was completely pointless and you want one source that will answer all those nagging questions coherently and in lots of useful detail, read these books. If you, like me, thought you already knew everything and wouldn't have read this book except that you were asked to review it, I found a lot of analysis in here that challenged my perspective in useful ways. But what makes this book such an unexpected treasure is the wide variety of examples, from ancient history to modern times, that Aric McBay explores, that provide such insight for us into what has worked and what hasn't. A firm believer in the idea that you can't forge the future unless you understand how we got to the present, Aric gives us the backstory on so many exciting and inspiring social movements and struggles around the world that I had never heard of, and provides really important insight into some of the more familiar ones." -David Rovics, singer/songwriter and host of This Week with David Rovics


"Every political generation thinks massive social change is around the corner, but activist movements more often collapse instead of becoming living revolutions of those changes. Activists need better understanding and comprehensive methods to dealing with complex civil society and Full Spectrum Resistance provides those. McBay has filled these volumes with illustrious examples from across the globe of resistance. Full of meaningful, personal reflections and thoughtful analysis to avoid many pitfalls holding back modern social/political movements, Full Spectrum Resistance offers strategies and tools to carry activists forward toward deeper changes in the world." -scott crow, author of Black Flags and Windmills: Hope, Anarchy and the Common Ground Collective


"Aric McBay has written a remarkable book that will forever change the way you understand political resistance. We are accustomed to protests that offer a fun playbook of marches, banners, chants, and so on. But McBay is seriously committed to revolutionary transformation and he is not satisfied to examine only those protests that conform comfortably to the usual catechism of non-violence. Nor does he adopt the sociological preoccupations with the social factors that shape the collective effort. Instead, his unwavering focus is on strategies that win." -Frances Fox Piven, Author of Challenging Authority and Poor People's Movements


"Drawing from both years of personal experience in social movements as well as important lessons from history, Full Spectrum Resistance is chock-full of examples of resistance movements using a diversity of tactics to fight and win. Presented from an anti-capitalist and anti-colonial perspective, this book is a manual on how to organize effective resistance movements." -Gord Hill, Author and artist of The 500 Years of Resistance Comic Book and The Antifa Comic Book


"Full Spectrum Resistance is a feat of story-telling and instruction on how to build movements that win. It does not restrict itself as an evaluation of activist campaigns, but researches a broad range of resistance tactics and strategies--ranging from non-violent mass mobilizations and land defense blockades to revolutionary armed struggles and small groups of militant saboteurs. I feel indebted to McBay for his work combing through the lessons of many dozens of resistance movements, ensuring that each analysis is accompanied by an illustration of these lessons in action. FSR's lessons not only inform how we might form organizations to enact social change, but also reveal how other types of organization can work in concert with each other to effectively push for substantial social change." -Sakura Saunders, Activist and Organizer

"For more than two decades, Aric McBay has been a thoughtful, principled and challenging voice for social movements in Canada and around the world. In these two volumes, he has distilled hundreds of hours of inspiring conversations with many different revolutionaries and organizers. They have rich experiences to share, both successes and failures along the way. The advice in these pages is practical, reflective, and deeply detailed. At the same time, it is visionary, hinting at the ways we can shape the future together. Full Spectrum Resistance is a resource that is an absolute must on the bookshelves of anyone who wants to make a better world--both seasoned activists and those who are new to the struggle. There is so much we can learn from each other." -Sara Falconer, director of digital communications at Canadian Red Cross

"In Full Spectrum Resistance, Aric McBay tackles the most important topic on the planet today - how to develop successful grassroots resistance groups--and in doing so, courageously uses the full spectrum of analysis without fear of breaching the limits of acceptable debate established by the status quo. He meticulously analyses successful and failed grassroots campaigns throughout history to help activists in determining the logistics, tactics and strategies that will win. Too many books offer no solution. This book is the antidote to the depression, despondency, and dysfunction that often follow when we confront the catastrophic problems of the twenty-first century." -Ann Hansen, activist and author of Direct Action: Memoirs of an Urban Guerrilla and Taking the Rap

Aric McBay is an organizer, a farmer, and author of four books. He writes and speaks about effective social movements, and has organized campaigns around prison justice, Indigenous solidarity, pipelines, unionization, and other causes. You can find his work at www.aricmcbay.org.
Loading...
or
Not Currently Available for Direct Purchase