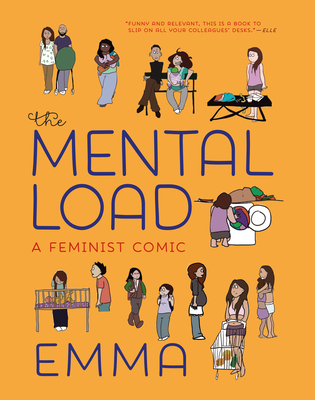 A new voice in comics is incisive, funny, and fiercely feminist.

"The mental load. It's incessant, gnawing, exhausting, and disproportionately falls to women. You know the scene--you're making dinner, calling the plumber/doctor/mechanic, checking homework and answering work emails--at the same time. All the while, you are being peppered with questions by your nearest and dearest 'where are my shoes?, 'do we have any cheese?...'" --Australian Broadcasting Corp on Emma's comic

In her first book of comic strips, Emma reflects on social and feminist issues by means of simple line drawings, dissecting the mental load, ie all that invisible and unpaid organizing, list-making and planning women do to manage their lives, and the lives of their family members. Most of us carry some form of mental load--about our work, household responsibilities, financial obligations and personal life; but what makes up that burden and how it's distributed within households and understood in offices is not always equal or fair. In her strips Emma deals with themes ranging from maternity leave (it is not a vacation!), domestic violence, the clitoris, the violence of the medical world on women during childbirth, and other feminist issues, and she does so in a straightforward way that is both hilarious and deadly serious.. If you're not laughing, you're probably crying in recognition. Emma's comics also address the everyday outrages and absurdities of immigrant rights, income equality, and police violence.
Emma has over 300,000 followers on Facebook, her comics have been. shared 215,000 times, and have elicited comments from 21,000 internet users. An article about her in the French magazine L'Express drew 1.8 million views--a record since the site was created. And her comic has just been picked up by The Guardian. Many women will recognize themselves in THE MENTAL LOAD, which is sure to stir a wide ranging, important debate on what it really means to be a woman today.

Praise For The Mental Load: A Feminist Comic…

"Emma’s strong, smart, clear-eyed book gives us the language (and the urgent desire) to shout from the rooftops about the maddening, unacknowledged injustices women face every day. It validates all the thoughts I have about being a woman and didn't have words for." —Liana Finck, author of Passing for Human: A Graphic Memoir

"[Emma's drawings] show how comics can break down something that seems complicated with utmost clarity. The idea of the mental load shines attention on how women so often become, by default, the household manager, organizing what needs to be done, so that a man expects to be asked to do tasks instead of executing them on his own initiative. The story creates an intimate flowchart of household routine; Emma illustrates just how effective even the most basic comics can be at crystallizing social dynamics." —Hillary Chute, New York Times Book Review

"French cartoonist Emma raises issues of inequality ... with humor and humanity, using short statements accompanied by disarmingly charming cartoons that point out the absurdities of some common social conventions and beliefs." —PopMatters

"The Mental Load, a feminist comic by Emma, takes readers on a journey of awakening that is at once delightfully whimsical and frustratingly serious. The graphic stories take aim at the way women’s unpaid caregiving and labor is invisible, undervalued and expected at home, and how it shapes and limits their experiences and career trajectories at work. An eye-opening gem." —Brigid Schulte, author of the New York Times bestselling Overwhelmed: How to Work, Love & Play When No One Has the Time

“Every activist is an alchemist at heart, transforming the familiar into the political. Emma does it by applying forensic objectivity to the everyday, to create visual essays which are transformative agents of change." —Jacky Fleming, author of The Trouble With Women

"Manages to blend the personal and the political with precise, honest insights. ... A likely gift buy to mark feminist friendships." —Publishers Weekly

"The gender wars of household chores." —The Guardian.

"Full of fire, fun and humour, Emma is a political cartoonist for our times. Don't miss this book." —Laurie Penny

"Funny and relevant, this is a book to slip on all your colleagues' desks." —Elle

"Her comics perfectly explain the mental load that women bear in the household." —Marie Claire

EMMA is a 36-year-old computer technician who lives in Paris but who says she learns "all over the place." She podcasts programs for the radio station France Culture, and her comics run in The Guardian. A former member of the collective Stop harcèlement de rue (Stop Street Harassment), she is confident that her feminist beliefs have now made it onto the "information superhighway" for good.
Loading...
or support indie stores by buying on