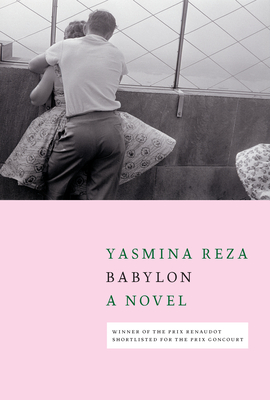 Winner of the Prix Renaudot
Shortlisted for the Prix Goncourt

Elisabeth is a woman whose curiosity and passion far exceed the borders of her quiet middle-class life. She befriends a neighbor, organizes a small dinner party. And then, quite suddenly, finds herself embarked with him on an adventure that is one part vaudeville and one part high tragedy. A quiet novel of manners turns into a police procedural thriller. Her motivations for risking everything she has are never transparent. In a world where matters of life and death are nearly always transported to a clinical setting, whether it be a hospital or a courtroom, here each character must confront them unassisted. A truly original and masterful novel from one of the world’s most inventive and daring artists.

"Reza is fascinated by what almost always remains unsaid: What happens if we dare to speak our minds? Babylon is darker and more mysterious than the plays that have brought her the most renown ... 'People who think there’s some orderly system to life—they’re lucky,' Elisabeth reflects. Any reader who begins with such a belief will have it overturned by the end of Reza’s haunting little tale." —Erica Wagner, The New York Times Book Review

"The lightness of touch bordering on comedy that [Yasmina Reza] brings to an otherwise dark tale is a reminder of her strengths as a dramatic writer, and it all adds up to a strange and memorable short book." —The Sunday Times (UK)

"...it is Ms. Reza’s dissection of Elizabeth’s malaise that is the real detective work here, and she renders it in a taut, unsparing prose style that is both exacting and unsettling ... There’s no doubting Ms. Reza’s powers as a novelist. At her best, she can remind one of no less than Albert Camus and Joan Didion (those bards of 20th-century despair). Writers may endure more than a twinge of envy at how effortlessly the author flits from successful playwriting to prose. It just ain’t fair. But then — as the protagonist of this darkly compelling novel would have commented — what is?" —East Hampton Star

"Starting always with real, concrete things, written in a style as clean and precise as an assassin’s, and with a ravishing elegance, Reza draws us into her sarcastic digressions. She skewers our empty presumptions, and manipulates the paradoxes with an irresistible instinct for the dialectic. There is pain here, tears of great loss and abandonment ... And, throughout, a sense of exile—from self, from others ... Reza manages to express our most deeply hidden secrets, our subterranean feelings of anguish, the ones we are least able to share with others." —Telerama (five-star review)

"For Reza truth is often to be found in the dark dance of the tragic and the absurd which fires all her writing. . . . Babylon [tells] the story of how the comfortable ordered lives of two middle-aged couples in the suburbs of Paris unravel over the course of an evening. But it is also a touching study of people living in exile from themselves. Everyone ... has been cut adrift from their youth and their dreams." —The Times of Israel

Playwright and novelist Yasmina Reza’s books have been translated into more than thirty-five languages. Her play ‘Art’ was the first translated play to win a Tony Award; Conversations After a Burial, The Unexpected Man, and Life X 3 have all been award-winning critical and commercial successes internationally; and God of Carnage, which also won a Tony Award, was made into a film directed by Roman Polanski with Jodie Foster, Kate Winslet, and John C. Reilly. Her play Bella Figura premiered in Germany in May 2015. Her fiction includes Hammerklavier, Desolation, and Adam Haberberg. Her last novel to appear in English was Happy Are the Happy, published by Other Press in 2015. She lives in Paris.

A longtime fiction editor at the New Yorker magazine, Linda Asher has translated Victor Hugo, Balzac, Simenon, Kundera, and many other writers. She has been awarded the Scott Moncrieff, the Deems Taylor, and the French-American/Florence Gould translation prizes, and is a Chevalier of the Order of Arts and Letters of the French Republic.
Loading...
or support indie stores by buying on