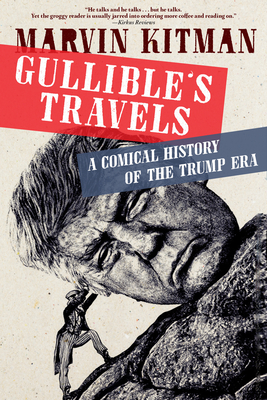 A Comical History of the Trump Era

How to have fun hating Trump

Kitman describes the land of Gulliblesylvania as a democratic country ruled by 34.9 % of the people, "a minority better known as 'the base,' of whom a candidate said he could shoot someone on Fifth Avenue and they would still vote for him." At first Kitman assumed that Trump's candidacy was a publicity stunt. After he realized it was serious, as a satirist he felt very lucky and began to keep a comical journal, modeled after A Journal of the Plague Year which Daniel Defoe described as "Observations of the most remarkable occurrence, which happened in London during the last great visitation in 1665"--which is not to compare the Trump administration to the bubonic plague, Kitman hastens to add. "For one thing, as our POTUS has been telling us, he's made America Great again--AND IT ONLY TOOK A YEAR AND A HALF!" Kitman adds, "And I have never before had such a good time observing and writing about the follies of our country."

Gullibles Travels includes 32 "Trumponicles; the debate over the president's intellectual capacity; "That Russian Thing;" "Who is Agent Orange"; and a CODA that asks the question, "How Will It All End?" Impeachment? 25th Amendment sacking? Resignation? Or reelection?

Humorist and author Marvin Kitman is a former columnist at New York Newsday and a finalist for the Pulitzer Prize for criticism. He is the author of, among others, The Man Who Would Not Shut Up: The Rise of Bill O'Reilly and The Making of the Prefident 1789.

Praise For Gullible's Travels: A Comical History of the Trump Era…

"Marvin Kitman is the funniest registered Republican ever to run for president, and when you read his hilarious new book, Gullible's Travels, you will laugh until you weep. My only reservation is that it is subtitled 'A Comical History of the Trump Era' when in fact it deals seriously with such issues as whether Trump is a patriot or a traitor, closer to Hitler or Mussolini. Buy it, read it, and decide for yourself." —Victor S. Navasky, author of Naming Names, former publisher of The Nation, and professor at Columbia University's School of Journalism

“Like every book by Marvin Kitman, this one will make you curl your hand into a fist and beat yourself in the head, hoping that will make you stop laughing. Don’t waste your time. Marvin is seriously funny. When they come to get you for laughing at political satire, you’ll be at the head of the line. Have fun.” —Alan Alda

“So you think there’s nothing funny about the Trump era? Marvin Kitman, who once ran for president (and is still young enough to do so again), knows better. His new book is the perfect antidote to Trump Derangement Syndrome. Better to die laughing now than wait for the Trump apocalypse.” —Harold Holzer, author of Presidents vs. the Press: From the Founding Fathers to Fake News

"If Jonathan Swift were alive he would steal from Marvin Kitman at every opportunity. Kitman merges satire with history and the horrible reality of present-day politics better than anyone writing in America today." —John R. MacArthur, president and publisher of Harper's Magazine

"In the world of the blind, the one-eyed man may not be king, but he probably is Marvin Kitman, pundit di tutti pundits. In Gullible’s Travels, he uses his well-honed wit to survey the desolate landscape of Trump’s America, in search of pearls left behind by swine. Kitman paid me to say this." —Michael Winship

"Marvin Kitman is one of the funniest guys since Calvin Coolidge, the only Republican with the guts to take on Trump." —Larry Josephson

"LOL: the best antidote to Trumpismo. Take twenty pages and call me in the morning." —Richard Lingeman
or support indie stores by buying on
Copyright © 2020 American Booksellers Association