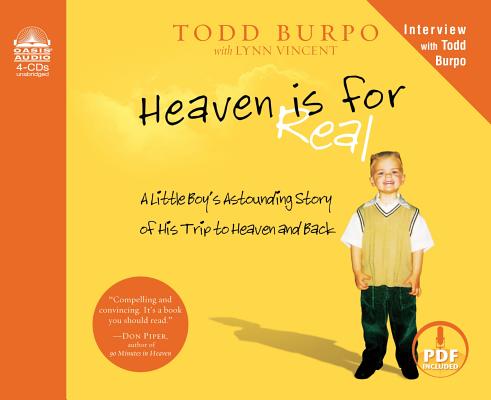 "Do you remember the hospital, Colton?" Sonja said. "Yes, mommy, I remember," he said. "That's where the angels sang to me." When Colton Burpo made it through an emergency appendectomy, his family was overjoyed at his miraculous survival. What they weren't expecting, though, was the story that emerged in the months that followed--a story as beautiful as it was extraordinary, detailing their little boy's trip to heaven and back. Colton, not yet four years old, told his parents he left his body during the surgery-and authenticated that claim by describing exactly what his parents were doing in another part of the hospital while he was being operated on. He talked of visiting heaven and relayed stories told to him by people he met there whom he had never met in life, sharing events that happened even before he was born. He also astonished his parents with descriptions and obscure details about heaven that matched the Bible exactly, though he had not yet learned to read. With disarming innocence and the plainspoken boldness of a child, Colton tells of meeting long-departed family members. He describes Jesus, the angels, how "really, really big" God is, and how much God loves us. Retold by his father, but using Colton's uniquely simple words, Heaven is for Real offers a glimpse of the world that awaits us, where as Colton says, "Nobody is old and nobody wears glasses.

Todd Burpo is pastor of Crossroads Wesleyan, a wrestling coach, a volunteer fireman, and he operates a garage door company with his wife, Sonja, who is also a children's minister, busy pastor's wife, and mom. Colton, now an active 11-year-old, has an older sister Cassie and a younger brother Colby. The family lives in Imperial, Nebraska. Lynn Vincent is the New York Times best-selling writer of Same Kind of Different as Me and Going Rogue: An American Life. The author or co-author of nine books, Vincent is a senior writer for WORLD magazine and a lecturer in writing at the King's College in New York City. She lives in San Diego, California.
Loading...
or
Not Currently Available for Direct Purchase