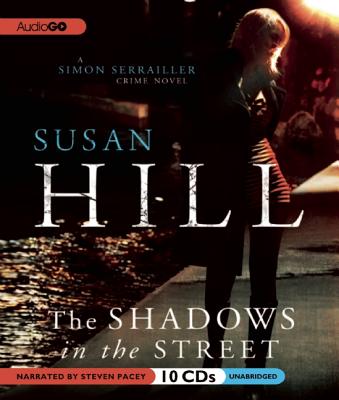 The Shadows in the Street (Simon Serrailler Crime Novel)

“Susan Hill continues to enthrall and captivate in her fifth crime novel featuring Simon Serrailler, and she has cemented his place in the upper tier of crime fiction sleuths along with Adam Dagliesh, Inspector Lindsey and Inspector Wexford. The Shadows in the Street is another spellbinding mystery complete with the saga of the Serrailler family.”
— Sally Brewster, Park Road Books, Charlotte, NC
View the List

Simon Serrailler has just wrapped up a difficult case for SIFT Special Incident Flying Taskforce and is on a sabbatical on a far-flung Scottish island when he is called back to Lafferton. Two local prostitutes have gone missing and are subsequently found strangled. By the time he gets back, another girl has disappeared. Is this a vendetta against prostitutes by someone with a warped mind? Or a series of killings by an angry punter? But then one of the Cathedral wives goes missing, followed by another young married woman. Serrailler follows lead after lead, all of which become dead ends. It is only through a piece of luck, a chance meeting, and a life put in grave danger that he finally gets a result.

Susan Hill is an award-winning novelist. She wrote "Mrs. de Winter, " the bestselling sequel to "Rebecca, " and the ghost story "The Woman in Black, "which was adapted for the stage and has been running in the West End for 18 years. Her Simon Serrailler crime series is highly successful.
Loading...
or
Not Currently Available for Direct Purchase