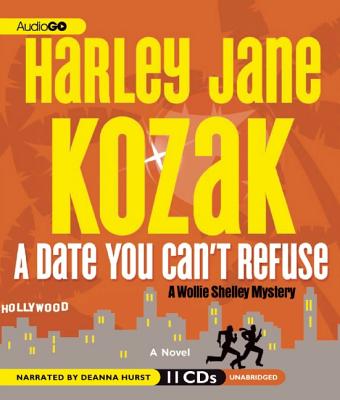 Wollie Shelley isn't happy about taking the job as a "social coach" at MediaRex, but the FBI makes her an offer she can't refuse. If she agrees to infiltrate the company, they'll guarantee that her schizophrenic brother will have a home at the federally subsidized halfway house he's come to love. So Wollie launches into teaching three foreign celebrities how to cope with the customs of Beverly Hills, improve their English, and become Oprah-ready. But when a coyote-chewed corpse appears in the MediaRex compound, Wollie realizes that her colleagues are concealing some serious secrets of their own.

Actress and author Harley Jane Kozak starred in movies such as "Parenthood, When Harry Met Sally...," and "Arachnophobia," and on television in the soap operas "Guiding Light" and "Santa Barbara." Kozak has written two previous novels featuring greeting card designer and amateur sleuth Wollie Shelley, "Dating Dead Men" (winner of the Agatha Award for best first novel of 2004) and "Dating Is Murder." She lives in Topanga Canyon, California.

Deanna Hurst is an actress, voiceover artist, and singer/songwriter. She has performed on stages throughout the U.S., and her television credits include "Judging Amy, Hunter," and "Silk Stalkings." She has voiced hundreds of commercials for radio and TV.
Loading...
or
Not Currently Available for Direct Purchase