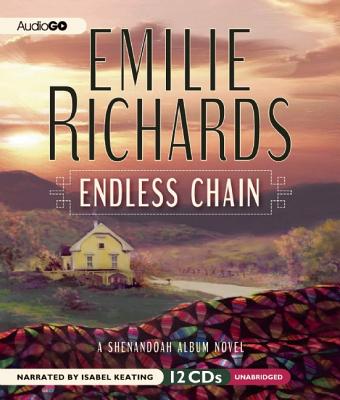 Sam Kinkade is finally feeling at home as a minister in rural Toms Brook, Virginia, content with his life and Shenandoah Valley congregation. But his plans to welcome the area's growing Hispanic community are being met with resistance. Fortunately, when the church-run community center is threatened, a stranger named Elisa Martinez walks through his door and Sam realizes he has found a woman capable of building bridges. Elisa isn't looking to make connections. She has come to Tom's Brook to hide. But despite her fears of discovery, she is enchanted by the beautiful work of--and the friendship offered by--the women who invite her to join their quilting circle. And even though she fears the consequences for both of them, she finds herself powerfully drawn to Sam, and to the generations-old love story rooted in the town's past. Will she and Sam repeat the past, or can they find the love and the freedom they seek at last?

Bestselling author Emilie Richards is the author of more than fifty novels, including the 1994 bestselling RITA winner "Dragonslayer." Richards has also been nominated three times for "Romantic Times" Reviewer's Choice Awards and is the recipient of their Career Achievement Award.

Isabel Keating garnered a 2004 Drama Desk Award, Theatre World Award and a 2004 Tony(R) nomination for her critically acclaimed Broadway performance as Judy Garland in "The Boy From Oz." She was awarded the Helen Hayes Award for Best Actress in 2000 for her portrayal of Flora Crewe in Tom Stoppard's "Indian Ink."
Loading...
or
Not Currently Available for Direct Purchase