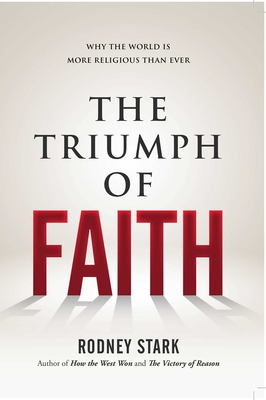 The Triumph of Faith (Hardcover)

Why the World Is More Religious than Ever

Believe it or not, the world is more religious than ever before.

Everyone seems to take it for granted that the world is getting more secular—that faith is doomed by modernity. Scientists, secularists, and atheists applaud the change; religious believers lament it.

But here’s the thing: they’re all wrong—and the bestselling author and influential scholar of religion Rodney Stark has the numbers to prove it.

The Triumph of Faith explodes the myth that people around the world are abandoning religion. Stark marshals an unprecedented body of data—surveys of more than a million people in 163 nations—to paint the full picture that both scholars and popular commentators have missed. And he explains why the astonishing growth of religion is happening and what it means for our future.

Stark’s bracing book is full of insights that defy the conventional wisdom. With vigorous prose he reveals:

As Stark shows, secularists have been predicting the imminent demise of religion for centuries. It is their unshakable faith in secularization that may be the most “irrational” of all beliefs.

As the author of How the West Won, The Victory of Reason, and many other bestselling works, Rodney Stark has a richly deserved reputation for writing page-turning, myth-busting books. He is also a groundbreaking scholar who has so reshaped the social scientific study of religion that his work has become the basis of a “new paradigm.” Stark puts all those talents on full display in The Triumph of Faith.

This book will change how you see both religion and the forces of secularization.

Rodney Stark is the author of How the West Won, The Victory of Reason, The Rise of Christianity, God’s Battalions, and many other books. He serves as Distinguished Professor of the Social Sciences at Baylor University, where he is codirector of the Institute for Studies of Religion. A Pulitzer Prize nominee, Stark has won three Distinguished Book Awards from the Society for the Scientific Study of Religion. He also served as president of that organization, and of the Association for the Sociology of Religion. Before earning his PhD at the University of California, Berkeley, Stark was a staff writer for several major publications. Visit the author online at ­www.rodneystark.com.

Praise For The Triumph of Faith: Why the World Is More Religious than Ever…

“God is not dead. Despite the predictions of academics and liberal religious leaders, the world is becoming more faith-filled, not less. . . . [Stark’s] real battle, though, is with intellectual elites of the West, who have been declaring the demise of religion for centuries and have been advancing a secularization thesis for decades. . . . Mr. Stark pushes back against the secularization thesis in several ways. . . . Indeed, religious fervor has taken hold in many countries where modernity is a settled fact.” —Wall Street Journal

“Stark [is] one of the most prominent, respected and consistently insightful sociologists of religion in the business. . . . I enthusiastically recommend this stimulating book to religious leaders and to those generally interested in what’s going on in the minds of people around the world. It has much to offer, not only for understanding but also, in my judgment, for action.”
—Deseret News

“Stark’s clear writing—he was a newspaper reporter before going to graduate school—distinguishes him from most academics. His argument that Christian practice wasn’t as common in the Middle Ages or in eighteenth-century America as we like to think distinguishes him from some church-oriented historians. The argument in his new book, The Triumph of Faith, that ‘the world is more religious than ever,’ distinguishes him from ‘new atheists’ who seem ready to take a victory lap.”
—World

“If, in fact, religion is losing its influence—and 72 percent of respondents to a 2014 Pew Research Center study say it is—most people say that’s not good. . . . But Rodney Stark, who holds the title of distinguished professor of social science at Baylor University, says in the new book The Triumph of Faith that ‘The End of Christian America’—so proclaimed by a 2009 Newsweek cover—and religion’s falling influence in the world aren’t necessarily so.”
—Chattanooga Times Free Press

“Reports about the death of religion in the United States are greatly exaggerated, sociologist Rodney Stark insists. . . . In a particularly provocative section, Stark takes issue with the much-reported rise of the ‘nones’ in the United States. He cites data indicating the percentage of people who do not attend houses of worship remains steady, and the increase in nonaffiliated Americans appears to be drawn from that subset of the total population. . . . Readers will benefit from reading Stark’s findings and conclusions that defy conventional wisdom.”
—Baptist Standard

“Stark has a vigorous prose style and a gift for clear explanation.” —New York Times

“Rodney Stark is one of America’s preeminent scholars of religion. . . . Often controversial, a slayer of historical myths.” —Patheos

“Giants are rare in any day. . . . [But] maybe we do have giants . . . for example, Rodney Stark. . . . He continually throws the discipline of sociology of religion into chaos.” —Andrew M. Greeley, University of Chicago

“[Stark] writes with a clarity and concision that make him a pleasure to read. . . . A number of fondly held myths get demolished.” —National Review

“Here is theoretical brashness combined with disarming common sense, a capacious curiosity, and a most uncommon ability to tell a complicated story in simple prose.” —Wayne A. Meeks, Yale University