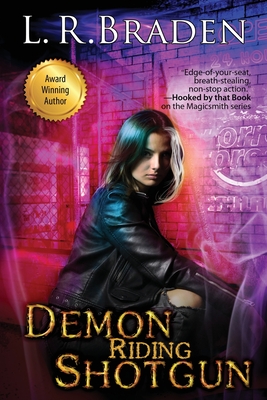 Possessed by a demon since she was eleven years old, Mira Fuentes maintains a fragile alliance with the snarky soul who shares her body. Together they hunt down unstable Rifters-demon-controlled humans bent on causing chaos in the mortal realm. But when a routine hunt leads to a powerful Rifter with plans for Baltimore, Mira quickly finds herself in over her head and at the top of the city's Most Wanted.

Recently retired from the PTF after losing his partner, Ty Williams now works for the Baltimore PD and keeps his distance from cases involving magic. But when a person dies of clearly magical causes and the PTF doesn't have any agents to spare, Ty is the closest thing the department has to an expert. Saddled with a new partner he doesn't want and a mountain of self-doubt, it's his job to track down a suspect who looks suspiciously like the one-night-stand he brought home from the bar last night.

Mira will have to set her trust issues aside and enlist the help of a man determined to uncover her secrets if she hopes to learn the identity of the demon's host and prevent the human race from becoming meat puppets for the denizens of the Rift.

L.R. Braden is the bestselling and award winning author of the Magicsmith urban fantasy series. Her work has won the Eric Hoffer Book Award for Sci-fi/Fantasy, the New Horizon Award for debut authors, and the Imadjinn Award for Best Urban Fantasy. She lives in the foothills of the Colorado Rockies with her wonderful husband, and precocious daughter. To connect online, visit her website and Facebook page.