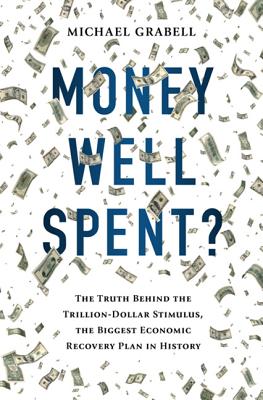 The Truth Behind the Trillion-Dollar Stimulus, the Biggest Economic Recovery Plan in History

The 2012 presidential campaign will, above all else, be a referendum on the Obama administration's handling of the financial crisis, recalling the period when Obama's "audacity of hope" met the austerity of reality. Central to this is the ''American Recovery and Reinvestment Act of 2009'' -- the largest economic recovery plan in American history. Senator Mitch McConnell gave a taste of the enormity of the money committed: if you had spent 1 million a day since Jesus was born, it still would not add up to the price tag of the stimulus package.

A nearly entirely partisan piece of legislation -- Democrats voted for it, Republicans against -- the story of how the bill was passed and, more importantly, how the money was spent and to what effect, is known barely at all. Stepping outside the political fray, ProPublica's Michael Grabell offers a perceptive, balanced, and dramatic story of what happened to the tax payers' money, pursuing the big question through behind-the-scenes interviews and on-the-ground reporting in more than a dozen states across the country.

Praise For Money Well Spent?: The Truth Behind the Trillion-Dollar Stimulus, the Biggest Economic Recovery Plan in History…

“Mr. Grabell does such a thorough job of cataloging the program's misdirected funds and misplaced priorities that one wonders how he settled on the inquisitive title....’Money Well Spent?’ would make a compelling book-club selection for politically oriented readers.”

The Economist’s Democracy in America blog
“The debate we had about the stimulus probably should have been a lot like the book Mr Grabell has written: a detailed investigation of what does and doesn't work in stimulus spending and whether the government really can jump-start a promising industry through investments, tax breaks and industrial policy. But that wasn't the debate we had.”

Glenn Altschuler, Huffington Post
“Richly detailed, judicious, thorough and timely, his book is a primer on how to evaluate this policy -- and all public policies -- in a highly partisan, polarized, paralyzed political climate.”

Tyler Cowen, Marginal Revolution
“I recommend Michael Grabell, Money Well-Spent?: The Truth Behind the Trillion-Dollar Stimulus, The Biggest Economic Recovery Plan in History. It is a very good journalistic account of how the money was spent, and less scandal-mongering than the title might indicate. I found it to be quite an objective account. There should be more books like this, looking at the nuts and bolts of economic legislation.”

Demos' Policy Shop blog
“The book is effective because it reopens old wounds. We are reminded of the aggravating lawmakers who were neither dogmatically against the stimulus nor inclined to pass a strong bill -- and yet, because Republican support was nearly nonexistent, were the linchpin of the effort.”
—-

Kirkus, December 1, 2011
“A deeply reported, well-written account of a difficult topic to capture, partly because of the complexity and partly because the stimulus package remains a work in progress.”

Publishers Weekly
“This thorough exploration of the stimulus will educate readers about where money went, not just in the focus cities but around the country, and the lasting impact of the Great Recession.”

Dave Davies,NPR’s Fresh Air
“an important, and eminently-readable book…The real value of Grabell's book is that it digs into the meat of the plan - how it was crafted, how the spending was divided into strikingly different programs, and what their impacts were.”

Michael Grabell has been a reporter at ProPublica since 2008, producing stories for USA Today, Salon, NPR, MSNBC.com and the CBS Evening News. Before joining ProPublica, he was a reporter at the Dallas Morning News. He has twice been a finalist for the Livingston Award for Young Journalists. He lives in New Jersey.