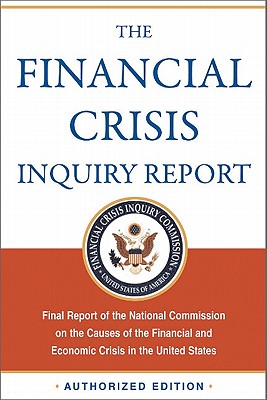 The definitive report on what caused America's economic meltdown and who was responsible. The financial and economic crisis has touched the lives of millions of Americans who have lost their jobs and their homes, but many have little understanding of how it happened. Now, in this very accessible report, readers can get the facts. Formed in May 2009, the Financial Crisis Inquiry Commission (FCIC) is a panel of 10 commissioners with experience in business, regulations, economics, and housing, chosen by Congress to explain what happened and why it happened. This panel has had subpoena power that enabled them to interview people and examine documents that no reporter had access to. The FCIC has reviewed millions of pages of documents, and interviewed more than 600 leaders, experts, and participants in the financial markets and government regulatory agencies, as well as individuals and businesses affected by the crisis. In the tradition of The 9/11 Commission Report, "The Financial Crisis Inquiry Report" will be a comprehensive book for the lay reader, complete with a glossary, charts, and easy-to-read diagrams, and a timeline that includes important events. It will be read by policy makers, corporate executives, regulators, government agencies, and the American people.

Praise For The Financial Crisis Inquiry Report, Authorized Edition: Final Report of the National Commission on the Causes of the Financial and Economic Crisis in the United States…

Slate, December 2010
"With those books, you'll never need to read anything that emerges from the FCIC. But if you do, read the good stuff: the interviews in which it grilled executives from Wall Street and the housing industry. The commission called in the loan-makers and bankers that caused the crisis and forced them to answer questions about their businesses—all for the public record. (It also subpoenaed thousands of pages of documents from Wall Street firms, though it is not clear if it will make those public.) There's no need to get the narrative from the FCIC. But if you want, say, to hear former Lehman CEO Dick Fuld try to defend himself, that's the place to go.”

NPR’s Morning Edition
“The majority report reads a lot like a book, and a bit of a potboiler at that. The commission conducted hundreds of hours of interviews, with industry insiders, policymakers, whistle-blowers and regulators. And the pages of the majority's report are strewn with quotes from these interviews — foreboding, eye-popping quotes.”

New York Times, February 2, 2011
“The report is full of fascinating information, rich detail and fine documentary evidence.” New York Times, January 30, 2011”The report still makes for compelling reading because so little has changed as a result of the debacle, in both banking and in its regulation.” Minneapolis Star-Tribune, January 29, 2011“At 662 pages, the FCIC report amounts to a sweeping forensic examination of a crisis that the commission says could have been avoided. The conclusions are written with style and infused with an appropriate tone of outrage, buttressed by more than 700 interviews (including one with Minnesota lawyer Prentiss Cox) and millions of documents.” New York Times, February 13, 2011
“full of fascinating detail”
New York Times
, February 17, 2011
“Actually, the report — and the online archive of testimony, interviews and documents that are now available — is a treasure trove of invaluable information about the causes and consequences of the Great Recession.” New York Review of Books, April 28, 2011“The most comprehensive indictment of the American financial failure that has yet been made…The definitive history of this period.” Forbes, April 18, 2011“The report is very comprehensive, is well written and provides study material for much more extensive analysis.”

CHOICE, August 2011  “Anyone interested in studying the causes of the financial crisis that reached a critical mass in 2008 must read this report… It is a Herculean research effort that deserves recognition.”