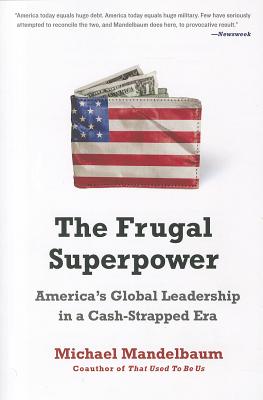 In this incisive new book, Michael Mandelbaum argues that the era marked by an expansive American foreign policy is coming to an end. During the seven decades from the U.S. entry into World War II in 1941 to the present, economic constraints rarely limited what the United States did in the world. Now that will change. The country's soaring deficits, fueled by the huge costs of the financial crash and of its entitlement programs -- Social Security and Medicare -- will compel a more modest American international presence.

In assessing the consequences of this new, less expensive foreign policy, Mandelbaum, one of America's leading foreign policy experts, describes the policies the United States will have to discontinue, assesses the potential threats from China, Russia, and Iran, and recommends a new policy, centered on a reduction in the nation's dependence on foreign oil, which can do for America and the world in the twenty-first century what the containment of the Soviet Union did in the twentieth.

Praise For The Frugal Superpower: America's Global Leadership in a Cash-Strapped Era…

Thomas Friedman, The New York Times, September 4, 2010
“Very timely”
Harvard Magazine
“It’s easy to be powerful (if not loved) when rich. But what happens when the chief guarantor of world security becomes less so? The author, of Johns Hopkins School of Advanced International Studies, sees a more modest U.S. profile, and less imported oil.”
Norfolk Virginian-Pilot, December 13, 2010
“In explaining the connection between recent domestic policy developments and U.S. foreign policy, the author provides an uncomplicated foundation for understanding the direct line between politics and economics.”
Washington Diplomat, February, 2011
“The book, released in August 2010, is timely not only because of lingering uncertainties surrounding the supposed economic recovery, but also because of the underlying, long-term issues it addresses. Mandelbaum makes a strong, clear case that America’s unrestrained foreign policy will crack under the weight of crippling deficits — fueled by the huge costs of the financial crash and the nation’s entitlement programs.”
Modern Judaism, February, 2011

The Observer (UK), August 8, 2010
“Cool and concise… It isn't often that you see foreign policy, healthcare and pensions discussed in the same breath, but it makes you sit up when you do.”

Financial Times, August 8, 2010
“Mr Mandelbaum has been preaching the gospel of petrol taxes for a long time, and does so persuasively… The author is always reasonable and clear.”
Sunday Times (UK), August 8, 2010
“Mandelbaum is persuasive in defining the structural problems of the American economy, and the consequences.”
Basil & Spice, August 17, 2010
“Mandelbaum writes in... clear, easy-to-comprehend prose. I recommend The Frugal Superpower without reservation and I hope that President Barack Obama and his Cabinet and advisors and Congress will follow the sensible policies advocated by its author.”
Pajamas Media, August 13, 2010
“My friend Michael Mandelbaum has a new book out this month with the timely title and theme The Frugal Superpower. It’s also short, as if Michael were reminding us this is not a good moment to overspend on excess paper in our cash-strapped world. As an advocate of the short book in general (with some obvious exceptions), I call that a win-win.”
or support indie stores by buying on
Copyright © 2020 American Booksellers Association