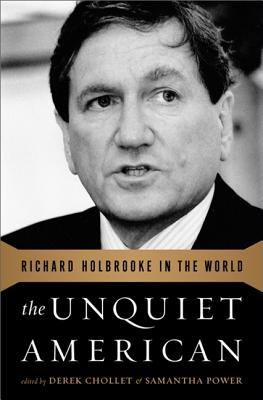 Richard Holbrooke in the World

Richard Holbrooke, who died in December 2010, was a pivotal player in U.S. diplomacy for more than forty years. Most recently special envoy for Iraq and Afghanistan under President Obama, Holbrooke also served as assistant secretary of state for both Asia and Europe, and as ambassador to both Germany and the United Nations. He had a key role in brokering a peace agreement among warring factions in Bosnia that led to the Dayton Peace Accords in 1995.

Widely regarded to possess one of the most penetrating minds of any modern diplomat of any nation, Holbrooke was also well known for his outsized personality, and his capacity to charm and offend in equally colossal measures. In this book, the friends and colleagues who knew him best survey his accomplishments as a diplomat, activist, and author. Excerpts from Holbrooke's own writings further illuminate each significant period of his career.

"The Unquiet American" is both a tribute to an exceptional public servant and a backstage history of the last half-century of American foreign policy.


Praise For The Unquiet American: Richard Holbrooke in the World…

Kirkus, October 10, 2011
“An elucidating collection of writing by and about the late fiery, outspoken, undeniably capable United Nations ambassador and longtime diplomat.”

Washington Post, November 13, 2011
“This is an important, timely and imaginative book, a collection of essays from friends, colleagues, journalists and academics who knew Holbrooke well and observed him closely. It is therefore, in one sense, a memorial or a celebration of someone ‘whose presence is sorely missed,’ as co-editors Derek Chollet, author of a book on the Dayton Accords, and Samantha Power, a Pulitzer-winning author and special assistant to Obama, write in the preface. But it is also about someone ‘whose contributions are known in silhouette but — with the lone exception of his role in ending the war in Bosnia — in surprisingly sparse detail’… The book takes readers through a smart and fast-paced history of half a century with Holbrooke — who, like some diplomatic Zelig, was always on the crucial scene.”

Boston Globe, November 19, 2011
“Together, the essays paint a portrait of a trailblazing diplomat and highly charismatic man… The Holbrooke that readers see in these pages is direct, sometimes blunt, but always moving forward…“The Unquiet American’’ is a powerful memorial to this unique, indefatigable, and exceptionally capable diplomat.”

Financial Times“A must-read for anyone interested in public service and US foreign policy. Holbrooke is best known as the architect of the Dayton accords, which brought a tenuous peace to the Balkans. This book is a reminder of how much more he accomplished in his 45-year diplomatic career.” New York Times Book Review“Derek Chollet and Samantha Power have assembled “The Unquiet American,” a festschrift-like tribute to Holbrooke that includes excerpts from his own writing. The result is a fascinating book.” Huffington Post, column by Stephen Schlesinger“Remarkable… captures the essence of the Holbrooke persona that dazzled the foreign policy community with its drive, intelligence, wiliness, humor, intense curiosity and characteristic dominance… What is unique about this book is that the editors have also matched every professional recollection with a set of articles written by Holbrooke himself commenting on the same subjects, almost as if Holbrooke intended to mark down his own personal account of past events for posterity.” Foreign Affairs"A spectacular series of essays retracing [Holbrooke’s] life and career through the eyes of those who knew him best. Power’s essay alone is worth the price of the book; reflecting on her mentor, Power is affectionate, exasperated, and eloquent, catching Holbrooke at his most intense, most personal, and most effective… A collection of writings that reminds those who knew Holbrooke what they have lost and allows others to learn something about one of the great men of our time.” DebtOwed.com
“Enlightening, eye-opening…The introduction by his widow, journalist and author Kati Marton, a Hungarian Jewish refugee, whom he married in 1995, Â is a love letter by a woman who is an outstanding writer…I donate most of my review copies to our perennial cash-strapped public library, but I’m keeping The Unquiet American in my personal collection.”

Lionel Barber, Financial Times
“The Unquiet American, edited by Derek Chollet and Samantha Power, is a riveting portrait of the late Richard Holbrooke, one of America’s top diplomatic troubleshooters, through his own writings and contributions from those who knew him. A must-read for anyone interested in US foreign policy and public service.”