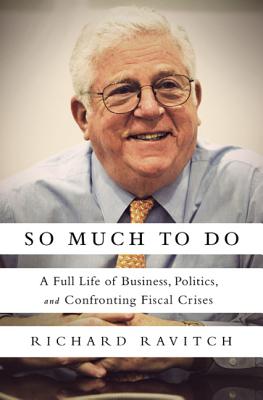 So Much to Do

A Full Life of Business, Politics, and Confronting Fiscal Crises

Every city and every state needs a Richard Ravitch. In sixty years on the job, whether working in business or government, he was the man willing to tackle some of the most complex challenges facing New York. Trained as a lawyer, he worked briefly for the House of Representatives, then began his career in his family's construction business. He built high-profile projects like the Whitney Museum and Citicorp Center but his primary energy was devoted to building over 40,000 units of affordable housing including the first racially integrated apartment complex in Washington, D.C. He dealt with architects, engineers, lawyers, bureaucrats, politicians, union leaders, construction workers, bankers, and tenants -- virtually all of the people who make cities and states work.

It was no surprise that those endeavors ultimately led to a life of public service. In 1975, Ravitch was asked by then New York Governor Hugh Carey to arrange a rescue of the New York State Urban Development Corporation, a public entity that had issued bonds to finance over 30,000 affordable housing units but was on the verge of bankruptcy. That same year, Ravitch was at Carey's side when New York City's biggest banks said they would no longer underwrite its debt and he became instrumental to averting the city's bankruptcy.

Throughout his career, Ravitch divided his time between public service and private enterprise. He was chairman of the Metropolitan Transportation Authority from 1979 to 1983 and is generally credited with rebuilding the system. He turned around the Bowery Savings Bank, chaired a commission that rewrote the Charter of the City of New York, served on two Presidential Commissions, and became chief labor negotiator for Major League Baseball.

Then, in 2008, after Governor Eliot Spitzer resigned in a prostitution scandal and New York State was in a post-financial-crisis meltdown, Spitzer's successor, David Paterson, appointed Ravitch Lieutenant Governor and asked him to make recommendations regarding the state's budgeting plan. What Ravitch found was the result of not just the economic downturn but years of fiscal denial. And the closer he looked, the clearer it became that the same thing was happening in most states. Budgetary pressures from Medicaid, pension promises to public employees, and deceptive budgeting and borrowing practices are crippling our states' ability to do what only they can do -- invest in the physical and human infrastructure the country needs to thrive. Making this case is Ravitch's current public endeavor and it deserves immediate attention from both public officials and private citizens.

Praise For So Much to Do: A Full Life of Business, Politics, and Confronting Fiscal Crises…

Weekly Standard
“Richard Ravitch is an extraordinary man. He's an intelligent, indefatigable, honest, honorable, accessible, and personable fellow who, for 45 years, has played a key role in rescuing New York's jerrybuilt fiscal structure from its own failings. Yes, that's my personal opinion of the man who has just written this autobiography, aptly titled So Much to Do; but it's an opinion broadly shared by New Yorkers caught up in the political life of the city and state over nearly half of a century.”

New York Times, DealBook, column by Andrew Ross Sorkin
“This last book has flown under the radar but deserves to be highlighted as simply a delightful memoir…It is a small book, but it is filled with great stories and lessons about state government, New York City and the influence of money in politics and life.”

Detriot Free Press
“For hints and striking parallels to the current drama in Detroit…So Much to Do: A Full Life of Business, Politics, and Confronting Fiscal Crises— is chock-full of insider tales of the wrangling among politicians, powerful Wall Street financiers and labor unions in New York.”

Wall Street Journal
"Mr. Ravitch's recommended solutions to the fiscal problems of America's cities—government transparency and public education—are elusive. But the rest of the country would doubtless benefit from having more scrupulous civic leaders like Mr. Ravitch."

New York Times
“So Much to Do gracefully synthesizes a serendipitous memoir illustrating the education of a public man; an enlightening, prescriptive citizen's manual into making government work; and a passionate ‘ode to democracy' (as Mr. Ravitch's friend Paul A. Volcker calls it in his blurb on the back cover) into a remarkably accessible book.”

New York Post
“He could have called it “Love Story,” and the title would have been faithful to its theme. The book by Dick Ravitch, “So Much to Do,” is the story of his love affair with public service… a delightful and insightful journey through a life of business, politics and emergencies…Fortunately, the book arrives as a new generation of leaders exhibits a shaky understanding of what fiscal prudence means, and the dangers of ignoring it. The book ought to be required reading by the new team at City Hall before it is too late.”—-