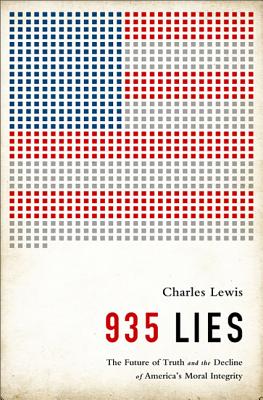 Facts are and must be the coin of the realm in a democracy, for government "of the people, by the people and for the people," requires and assumes to some extent an informed citizenry. Unfortunately, for citizens in the United States and throughout the world, distinguishing between fact and fiction has always been a formidable challenge, often with real life and death consequences. But now it is more difficult and confusing than ever. The Internet Age makes comment indistinguishable from fact, and erodes authority. It is liberating but annihilating at the same time.

For those wielding power, whether in the private or the public sector, the increasingly sophisticated control of information is regarded as utterly essential to achieving success. Internal information is severely limited, including calendars, memoranda, phone logs and emails. History is sculpted by its absence.

Often those in power strictly control the flow of information, corroding and corrupting its content, of course, using newspapers, radio, television and other mass means of communication to carefully consolidate their authority and cover their crimes in a thick veneer of fervent racialism or nationalism. And always with the specter of some kind of imminent public threat, what Hannah Arendt called "objective enemies.'"

An epiphanic, public comment about the Bush "war on terror" years was made by an unidentified White House official revealing how information is managed and how the news media and the public itself are regarded by those in power: "[You journalists live] "in what we call the reality-based community. [But] that's not the way the world really works anymore. We're an empire now, and when we act, we create our own reality . . . we're history's actors . . . and you, all of you, will be left to just study what we do." And yet, as aggressive as the Republican Bush administration was in attempting to define reality, the subsequent, Democratic Obama administration may be more so.

Into the battle for truth steps Charles Lewis, a pioneer of journalistic objectivity. His book looks at the various ways in which truth can be manipulated and distorted by governments, corporations, even lone individuals. He shows how truth is often distorted or diminished by delay: truth in time can save terrible erroneous choices. In part a history of communication in America, a cri de coeur for the principles and practice of objective reporting, and a journey into several notably labyrinths of deception, 935 Lies is a valorous search for honesty in an age of casual, sometimes malevolent distortion of the facts.

A bestselling author and national investigative journalist for the past thirty years, Charles Lewis is a tenured professor of journalism and, since 2008, the founding executive editor of the Investigative Reporting Workshop at the American University School of Communication in Washington, D.C. He is the founder of The Center for Public Integrity and several other nonprofit organizations. He lives in Washington, D.C.

Praise For 935 Lies: The Future of Truth and the Decline of Americas Moral Integrity…

“Charles Lewis probably did more than anyone else to launch institutional nonprofit journalism in America. So it is worth paying attention to what he has to say… His reflections, especially on network television, point up the inherent limits of our largest legacy news organizations and embody the hope that new entrants will fill the gaps in newsgathering and, thereby, enlarge the public's capacity for democratic governance.”—the Wall Street Journal

“935 LIES provides a powerful survey of the quest for truth amid an explosion of mis-information and misinterpretations in everything from news reporting by traditional TV media to paid lobbyists, advocates, the Internet, and more. The truth becomes even more confusing and impossible under such an onslaught, and 935 Lies explores the many ways truth is manipulated by business and political interests alike. Any college-level reader concerned with the evolving world of disinformation will find this a powerful revealing study.” —Midwest Book Review

“At a time when truth is under siege, acclaimed investigative reporter Charles Lewis has given us a gripping insider's guide to a new journalistic ecosystem which is exposing lies, greed, and abuses of power across the globe. For citizens everywhere who care about truth-telling and holding those in power accountable.”
—Katrina vanden Heuvel, Editor and publisher of The Nation

“Though people in Washington lie all the time, the word ‘lie' is very rarely used. In 935 Lies, veteran investigative journalist Chuck Lewis reminds us, in vivid detail, of the many times government leaders and corporations have lied to us and sought to muscle the news business to keep it from exposing the truth. Don't read it and weep ... read it and get angry!”
—Ray Suarez, Host, Inside Story, Al Jazeera America
or
Not Currently Available for Direct Purchase
Copyright © 2020 American Booksellers Association