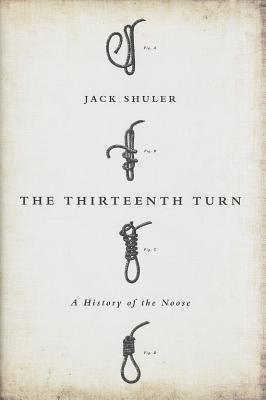 A History of the Noose

The story of a rope, a symbol, and rough justice in America.

The hangman's knot is a simple thing to tie, just a rope carefully coiled around itself up to thirteen times. But in those thirteen turns lie a powerful symbol, one that is all too deeply connected to America's past -- and present.

The last man to be hanged in the United States was Billy Bailey, who was executed in Delaware in 1996 for committing a double murder. Even today, hanging is still legal, in certain situations, in New Hampshire and Washington. And the noose remains a potent cultural symbol. An incident in Jena, Louisiana, in 2006, in which nooses were used to menace black students, made national news. Yet little has changed: according to author Jack Shuler, there have been nearly 100 "noose incidents" just in the last two years.

The Thirteenth Turn unravels these stories, from Judas Iscariot, perhaps the most infamous hanged man, to the killing of Perry Smith and Richard Hickock, the murderers at the heart of Truman Capote's In Cold Blood, and beyond. In his travels across America, Shuler traces the evolution of this dark practice. As he investigates the death of John Brown, or the 1930 lynching that inspired the song "Strange Fruit," he finds that the very places that perpetrated these acts now seek to forget them.

Shuler's account is a kind of shadow history of America: a reminder that vigilantes and hangmen play a crucial role in our national story. The Thirteenth Turn is a courageous and searching book that reminds us where we come from, and what is lost if we forget.

Praise For The Thirteenth Turn: A History of the Noose…

“Richly researched and beautifully written, this is an essential history of our country”—Boston Globe

“A book that is as haunting as its subject”—CHOICE

“In-depth reportage... a comprehensive, remarkable and necessary examination of our country's ugly past”—Truthdig

“The Thirteenth Turn is a thoughtful, profound book. Jack Shuler has taken an object we are all too familiar with in our history-the noose-and found in its story an urgent lesson on how to live." —Sr. Helen Prejean, CSJ, author of Dead Man Walking and Death of Innocents

Jack Shuler holds the John and Christine Warner Chair at Denison University, where he is an associate professor teaching American literature and Black Studies. He is the author of two books on the nexus of race and violence in America, Calling Out Liberty and Blood and Bone. Shuler's criticism, interviews, reviews, and poems have appeared in the Columbia Journal of American Studies, Journal of Southern History, South Carolina Review, Southern Studies, and Failbetter, among others. He lives in Ohio.
Loading...
or
Not Currently Available for Direct Purchase