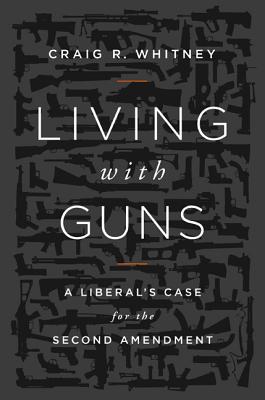 A Liberal's Case for the Second Amendment

Newtown. Columbine. Virginia Tech. Tucson. Aurora. Gun violence on a massive scale has become a plague in our society, yet politicians seem more afraid of having a serious conversation about guns than they are of the next horrific shooting. Any attempt to change the status quo, whether to strengthen gun regulations or weaken them, is sure to degenerate into a hysteria that changes nothing. Our attitudes toward guns are utterly polarized, leaving basic questions unasked: How can we reconcile the individual right to own and use firearms with the right to be safe from gun violence? Is keeping guns out of the hands of as many law-abiding Americans as possible really the best way to keep them out of the hands of criminals? And do 30,000 of us really have to die by gunfire every year as the price of a freedom protected by the Constitution?

In Living with Guns, Craig R. Whitney, former foreign correspondent and editor at the New York Times, seeks out answers. He re-examines why the right to bear arms was enshrined in the Bill of Rights, and how it came to be misunderstood. He looks to colonial times, surveying the degree to which guns were a part of everyday life. Finally, blending history and reportage, Whitney explores how twentieth-century turmoil and culture war led to today's climate of activism, partisanship, and stalemate, in a nation that contains an estimated 300 million guns--and probably at least 60 million gun owners.

In the end, Whitney proposes a new way forward through our gun rights stalemate, showing how we can live with guns -- and why, with so many of them around, we have no other choice.

Praise For Living with Guns: A Liberal's Case for the Second Amendment…

Adam Winkler, Author of Gunfight: The Battle over the Right to Bear Arms in America
“Living With Guns is a fascinating and provocative illumination of America's centuries-long battle over gun control. No matter what your views on guns, you'll find yourself unable to put down this riveting history and thoughtful analysis of one of America's most contentious issues. Fair-minded, astute, and balanced, Living With Guns will change the way you think about guns and gun control.”

Kirkus“A fresh and balanced argument.”
David K. Shipler, author of The Rights of the People and Rights at Risk"Whether you come from the right or the left, this meticulously researched and argued book will make you think hard and reconsider your assumptions. His illuminating research into gun ownership and gun control in early America is an antidote to absolutism. It should be read closely by both sides in the debate."

Booklist“A very thoughtful, well-researched, and well-reasoned argument in favor of the right to bear arms within reasonable limitations and an appeal to responsible gun ownership.”

Craig R. Whitney spent his entire professional career as a reporter, foreign correspondent, and editor at the New York Times, where he was assistant managing editor in charge of standards and ethics when he retired in 2009. He is the author most recently of All The Stops. He lives in New York City.