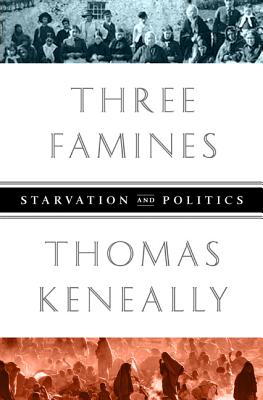 Famine may be triggered by nature but its outcome arises from politics and ideology. In Three Famines, award-winning author Thomas Keneally uncovers the troubling truth -- that sustained widespread hunger is historically the outcome of government neglect and individual venality. Through the lens of three of the most disastrous famines in modern history -- the potato famine in Ireland, the famine in Bengal in 1943, and the string of famines that plagued Ethiopia in the 1970s and 1980s -- Keneally shows how ideology, mindsets of governments, racial preconceptions, and administrative incompetence were, ultimately, more lethal than the initiating blights or crop failures.

In this compelling narrative, Keneally recounts the histories of these events while vividly evoking the terrible cost of famine at the level of the individual who starves and the nation that withers.

Thomas Keneally won the Booker Prize in 1982 with Schindler's Ark, later made into the Academy Award-winning film Schindler's List by Steven Spielberg. He has written ten works of non-fiction, including his recent memoir Searching for Schindler. His novels The Chant of Jimmy Blacksmith, Gossip From the Forest, and Confederates were all shortlisted for the Booker Prize, while Bring Larks and Heroes and Three Cheers for the Parclete won the Miles Franklin Award. He lives in Australia.
Loading...
or
Not Currently Available for Direct Purchase