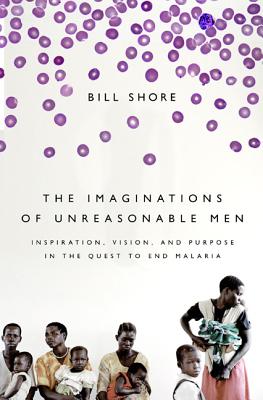 The Imaginations of Unreasonable Men

Inspiration, Vision, and Purpose in the Quest to End Malaria

A small cadre of scientists -- collaborators and competitors -- are determined to develop a vaccine for malaria -- a feat most tropical disease experts have long considered impossible. Skepticism, doubt, and a host of logistical and financial obstacles dog their quest. Success may ultimately elude them. Why, and how, do they persist?

Bill Shore is a writer, philanthropist, and business leader who knows from personal experience the rare and elusive nature of transformative innovation. In this moving and inspiring book, the story of these uncompromising scientists serves as springboard for his passionate inquiry into the character and moral fabric of those who devote their lives to solving the world's most pressing and perplexing problems. What does it take to achieve the impossible? It takes whatever it takes.

Praise For The Imaginations of Unreasonable Men: Inspiration, Vision, and Purpose in the Quest to End Malaria…

Richard Russo,Pulitzer Prize–winning author of Empire Falls
“Bill Shore’s The Imaginations of Unreasonable Men is all about links, often invisible, between science and compassion, imagination and reason, philanthropy and markets, competition and cooperation. It’s also about solving some of the world’s most intractable problems—intractable, Shore argues passionately and convincingly, because all but a few of us too readily accept the conventional wisdom that they are unsolvable. It is, in other words, a necessary book.”

David Gergen, director of the Center for Public Leadership at Harvard’s Kennedy School of Government
“Bill Shore provides fascinating insights into the journeys of two wonderful men trying to change the world—one a scientist and the other the author himself. Both lives show that character, ambition, imagination, and the stubborn conviction that good is not good enough are indispensable to every leader seeking higher ground.”

Bill Shore is the founder and executive director of Share Our StrengthÂ®, the nation's leading organization working to end childhood hunger in America, which he founded in 1984. He currently serves on the board of directors of The Timberland Company, and of Venture Philanthropy Partners. Shore has been an adjunct professor at New York University's Stern School of Business and is currently the program advisor for the Reynolds Foundation Fellowship program at the John F. Kennedy School of Government's Center for Public Leadership. He is the author of three books.
Loading...
or support indie stores by buying on