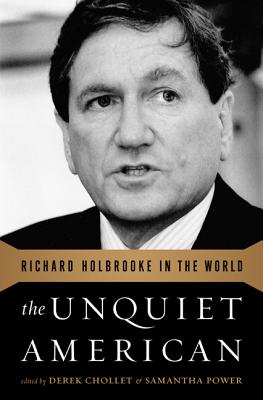 Richard Holbrooke in the World

Richard Holbrooke, who died in December 2010, was a pivotal player in U.S. diplomacy for more than forty years. Most recently special envoy for Iraq and Afghanistan under President Obama, Holbrooke also served as assistant secretary of state for both Asia and Europe, and as ambassador to both Germany and the United Nations. He had a key role in brokering a peace agreement among warring factions in Bosnia that led to the Dayton Peace Accords in 1995.

Widely regarded to possess one of the most penetrating minds of any modern diplomat of any nation, Holbrooke was also well known for his outsized personality, and his capacity to charm and offend in equally colossal measures. In this book, the friends and colleagues who knew him best survey his accomplishments as a diplomat, activist, and author. Excerpts from Holbrooke's own writings further illuminate each significant period of his career.

The Unquiet American is both a tribute to an exceptional public servant and a backstage history of the last half-century of American foreign policy.

Chollet has also been a fellow at The Center for a New American Security (CNAS), the Brookings Institution, the Center for Strategic and International Studies (CSIS), and the American Academy in Berlin. He has been a visiting scholar and adjunct professor at The George Washington University and an adjunct associate professor at Georgetown University.

Samantha Power: " Samantha Power is the executive director of the Carr Center for Human Rights Policy at the John F. Kennedy School of Government at Harvard University. From 1993 to 1996 she covered the wars in the former Yugoslavia as a reporter for U.S. News and World Report and the Economist. In 1996 she worked for the International Crisis Group (ICG) as a political analyst, helping launch the organization in Bosnia. She is a frequent contributor to the New Republic and is the editor, with Graham Allison, of Realizing Human Rights: Moving from Inspiration to Impact. A native of Ireland, she moved to the United States in 1979 at the age of nine, and graduated from Yale University and Harvard Law School. She lives in Winthrop, Massachusetts. "
Loading...
or support indie stores by buying on