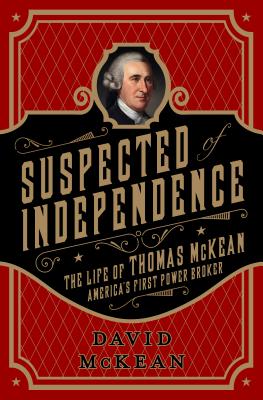 The last signatory to the Declaration of Independence was one of the earliest to sign up for the Revolution: Thomas McKean lived a radical, boisterous, politically intriguing life and was one of the most influential and enduring of America's Founding Fathers.

Present at almost all of the signature moments on the road to American nationhood, from the first Continental Congress onward, Thomas McKean was a colonel in the Continental Army; president of the Continental Congress; governor of Pennsylvania; and, perhaps most importantly, chief justice of the new country's most influential state, Pennsylvania, a foundational influence on American law. His life uniquely intersected with the many centers of power in the still-formative country during its most vulnerable years, and shows the degree of uncertainty that characterized newly independent America, unsure of its future or its identity.

Thomas McKean knew intimately not only the heroic figures of the Revolutionary era -- George Washington, John Adams, Thomas Jefferson, and Benjamin Franklin -- but also the fascinating characters who fought over the political identity of the new country, such as Caesar Rodney, Francis Hopkinson, and Alexander Dallas. His life reminds us that America's creation was fraught with dangers and strife, backstabbing and bar-brawling, courage and stubbornness. McKean's was an epic ride during utterly momentous times.

“McKean reaches back into his family's history to tell the story of revolutionary-era America through the eyes of a lesser-known founding father…The author efficiently alternates between politics and military developments, keeping the cradle-to-grave biography moving briskly.” —Publishers Weekly

"Perhaps second only to New York's George Clinton, revolutionary era political leader Thomas McKean remains America's least known founder despite having stood at or near the center of the action from the Stamp Act Congress through the cataclysmic election of 1800. Clearly written and comprehensive, Suspected of Independence should help to right the balance." —Edward J. Larson, Pulitzer Prize-winning author of The Return of George Washington

"In this fascinating tale of a long forgotten founder, David McKean reminds us that politics have long been rough and nasty—but that integrity and steadfast faith in the rule of law can, then as now, overcome partisan pettiness and reckless passion. McKean is a gifted writer and historian with a clear-eyed view of the past that is highly relevant to the present." —Evan Thomas, author of Being Nixon

"A brisk biography...McKean was more than a leading jurist in the Revolutionary era.”—Wall Street Journal

"[A] conscientious and highly readable new biography of a man who, though neglected by most historians, played a major supporting role in our early history.”—The Washington Times

“David McKean…tells his ancestor's story with verve…Suspected of Independence is a book shedding light on a forgotten, yet important figure in American history.”—The Galveston County Daily News

"Author McKean and the historical McKean share a common name and heritage, adding a personal layer to the book. It illuminates an important personage frequently neglected in revolution-era narratives, creating a fine read for American history buffs."—Jeffrey Meyer, Library Journal

"The list of [Founding Father Thomas McKean's] accomplishments is long: he was a signer of the Declaration of Independence, a three-term governor of Pennsylvania, and the president of the Continental Congress….His has been long in coming and worth the wait. For students of the Revolutionary era, the author delivers a useful biography of a significant player in the birth pangs of the new nation." —Kirkus Reviews

David McKean is director of Policy Planning for the US Department of State. He is the author of three previous books on American political history: Friends in High Places with Douglas Frantz (Little, Brown and Co.), a New York Times Notable Book; Tommy the Cork (Steerforth Press), a Washington Post Book World cover and Best Book; and The Great Decision with Cliff Sloan (PublicAffairs), a History Book of the Month Club selection.

McKean is a board member of the Foundation for the National Archives. In 2011, he was a Public Policy Scholar at the Woodrow Wilson International Center for Scholars. He previously served as CEO of the John F. Kennedy Library Foundation in Boston. Prior to that, McKean was the staff director for the US Senate Foreign Relations Committee. He was chief of staff in Senator John Kerry's personal office from 1999 to 2008.

Mr. McKean was a key player in laying the groundwork for the Senator's presidential campaign in 2004 and was a cochairman of the senator's presidential transition team. In 1997 and 1998, he served as the minority staff director for the US Senate Permanent Subcommittee on Investigations. David McKean taught at the Waterford Kamhlaba School in Swaziland from 1981-1982.
Loading...
or
Not Currently Available for Direct Purchase