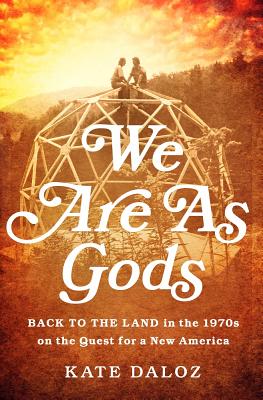 We Are As Gods (Hardcover)

At the dawn of the 1970s, waves of hopeful idealists abandoned the city and headed for the country, convinced that a better life awaited. They were full of dreams, mostly lacking in practical skills, and soon utterly out of money. But they knew paradise when they saw it.

When Loraine, Craig, Pancake, Hershe, and a dozen of their friends came into possession of 116 acres in Vermont, they had big plans: to grow their own food, build their own shelter, and create an enlightened community. They had little idea that at the same moment, all over the country, a million other young people were making the same move -- back to the land.

We Are As Gods follows the Myrtle Hill commune as its members enjoy a euphoric Free Love summer. Nearby, a fledgling organic farm sets to work with horses, and a couple -- the author's parents -- attempts to build a geodesic dome. Yet Myrtle Hill's summer ends in panic as they rush to build shelter while they struggle to reconcile their ideals with the somber realities of physical hardship and shifting priorities -- especially when one member goes dangerously rogue.

Kate Daloz has written a meticulously researched testament to the dreams of a generation disillusioned by their parents' lifestyles, scarred by the Vietnam War, and yearning for rural peace. Shaping everything from our eating habits to the Internet, the 1970s Back-to-the-Land movement is one of the most influential yet least understood periods in recent history. We Are As Gods sheds light on one generation's determination to change their own lives and, in the process, to change the world.

Kate Daloz received her MFA from Columbia University, where she also taught undergraduate writing and served as assistant director of the Writing Center. She teaches in the writing center at Baruch College and works as a freelance writing consultant. Daloz grew up in Vermont's Northeast Kingdom, in the geodesic dome her parents built after coming home from the Peace Corps.

She was also a research assistant for Ron Chernow (Washington: A Life) and Stacy Schiff (Cleopatra: A Life), as well as Brenda Wineapple (White Heat: The Friendship of Emily Dickenson and Thomas Wentworth Higginson) and is a founding member of Neuwrite: Columbia Scientists and Writers. Her work has appeared in the American Scholar among other publications. Kate Daloz lives in Brooklyn with her husband and children.

Praise For We Are As Gods: Back to the Land in the 1970s on the Quest for a New America…

“Daloz's careful documentation of the movement manages to be both respectful and critical. Keep this book close by for those moments when you think about giving it all up and moving to a goat farm in Montana.” —The Frisky

“A fascinating account of a utopian movement made even more relevant by the author's personal perspective.” —Booklist, Starred Review

“In this deep study…Daloz gives an intimate look into the social dynamics and experiences [of the Myrtle Hill Farm], putting names and faces on the ambitions, hopes, and failures of the back-to-the-land movement...An informative look at an era that laid the groundwork for the modern organic
movement and its relatives.” —Publishers Weekly

“Engaging…Daloz's frank account is revealing; she doesn't shy away from documenting the many problems that plagued the fervent communards, including a lack of diversity and reliance on unacknowledged privilege…Perhaps the wave of like-minded idealists venturing forth today will learn from both their historical mistakes and successes. Memoir lovers and social historians will enjoy this account of radical living.” —Library Journal

“A loving but honest history...Daloz has the journalist's gift for getting people to explain themselves, the historian's ability to explain the context in which they made their choices, and the novelist's power for revealing character through action, plot, and the perfectly chosen detail.” —Reason

“In an engaging, novelistic style, Daloz traces the founding and growing pains of Myrtle Hill Farm — the pseudonym for a real commune in the Northeast Kingdom, and a microcosm of the 1970s movement that reversed America's urban migration pattern. The book maintains a delicate balance, neither an exposé of back-to-the-landers nor a celebration of them.” —Seven Days

"Ms. Daloz has written a book that is both scholarly and intimate. It's sometimes grim, sometimes funny, and always fascinating." —Tena Starr, Barton (VT) Chronicle

“A hang-onto-your-seats ride back to the early 1970s, and onto the commune at Myrtle Hill in the Northeast Kingdom…We Are As Gods bubbles like a fermenting batch of kombucha, full of wild life and audacity, youthful energy, inventiveness and success, missteps and tragic accidents.” —The North Star Monthly

“Joni Mitchell once said that we've got to get back to the garden, and tens of thousands heeded; in the years surrounding Woodstock, communes sprouted like mushrooms across America. Born to back-to-the-landers but now a denizen of Brooklyn, Daloz writes with firsthand knowledge of the good and bad of these wishfully self-reliant places… Well written and full of firsthand insight.” —Kirkus Reviews

"How do you move a geodesic dome? A deft, delightful history of the back-to-the-land movement, when a generation of young people turned their idealistic backs on urban life. Kate Daloz is at once clear-eyed and personal; in an artful narrative, she explores the origins of this attempt to live deliberately and its enduring legacies." –Stacy Schiff, Pulitzer Prize-winning author of Cleopatra: A Life