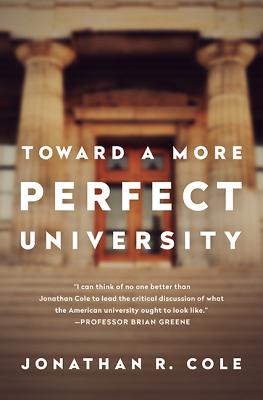 Toward a More Perfect University

A renowned academic leader identifies the ways America's great universities should evolve in the decades ahead to maintain their global preeminence and enhance their intellectual stature and social mission as higher education confronts the twenty-first-century developments in technology, humanities, culture, and economics.

developing effective admission policies,
creating the most meaningful examinations,
dealing with rising costs,
making undergraduate education central to the university's mission,
exploring the role of the humanities,
facilitating new discoveries and innovation,
determining the place for professional schools,
developing the research campuses of the future,
assessing the role of sports,
designing leadership and governance,
and combating intellectual and legal threats to academic freedom.

Praise For Toward a More Perfect University…

“I can think of no one better than Jonathan [R.] Cole to lead the critical discussion of what the American university ought to look like as the preeminent seat of scholarly achievements and scientific discoveries.” —Professor Brian Greene

“Jonathan Cole takes on many of the problems faced by the modern university, including the role of athletics, the challenges of affordability and access, the rise and potential of MOOCs, and the deteriorating relationship between government and academia. He offers concrete and practicable suggestions to addressing these problems. He even acknowledges the difficulty of making structural changes in academia and suggests how such changes might be more easily accommodated. Cole has written a masterful assessment of where our universities have come from, where they are now, and how they must change to ensure they remain world leaders in education and research.” —John L. Hennessy, president, Stanford University

“Jonathan Cole knows his stuff, and it is once again on display in this new book. Drawing on deep expertise and experience he writes cogently and candidly about that complex gem of American culture, the research university. Yes, he argues, American research universities are clearly the best in the world, but they can and should be even better. On a wide range of subjects from admissions and student debt to the value and cost of high-powered scientific research, he offers ideas for reform and improvement, some of them controversial, all of them smart. This is a book by an insider that insiders and outsiders alike need to read.” —Hunter R. Rawling III, president, Association of American Universities, president emeritus, Cornell University

“Jonathan Cole's engaging book—filled with new ideas—proposes significant structural and other reforms that universities should consider if they are to enhance their stature as major contributors to our innovative and open society.” —George Soros

“Jonathan Cole's new work is a magnificent description of the history, evolution, and rise to global preeminence of America's research universities. With a mastery reflecting a deep understanding of the academic world, Jonathan unflinchingly confronts the challenges facing these institutions in an increasingly skeptical environment. He offers bold, sometimes provocative, innovative, and concrete proposals for insuring academic leadership for the United States. This is a must-read for those who care about our collective future.” —Mary Sue Coleman, president emerita, University of Michigan, and president elect, Association of American Universities

“Jonathan Cole brings to bear on the problem of higher education's future viability his years of experience as an education theorist and university leader. He calls for communities and institutions to address the roadblocks we all see in higher education—access and rising costs among them—and to nurture the will to invest in and fortify the path of learning from pre-school to graduate school. Cole's prescription is bold and imaginative and will compel the best minds to undertake the challenge he poses.” —Henry Louis Gates, Jr., Alphonse Fletcher University Professor, Harvard University

“Has the feel of a long memo from a central administrative office….But there is serious content in the book and I very much hope the memo gets read…. Mr. Cole is surely right that rebuilding the trust between the people's representatives and great universities is essential—not just for the benefit of the happy few on campus but for the country as a whole.” —Wall Street Journal

“Cole knows higher education inside and out…. [TOWARD A MORE PERFECT UNIVERSITY] deserves a wide readership.” —Library Journal

"Eminently well-informed and pragmatic, Cole's work not only offers a clear-eyed analysis of the current state of higher education in the U.S. It also provides a detailed starting point for dialogues about the function and shape of the great American universities of the future. An ambitious and visionary examination of American universities and ‘how to develop them still further so that they may maximize their full potential.'” —Kirkus Reviews

Jonathan R. Cole, currently the John Mitchell Mason Professor at Columbia University, is widely known throughout the United States for his fourteen years (1989-2003) as Columbia's provost, holding the position for the second-longest tenure in the university's 250-year history. He has also served as dean of faculties and vice president for arts and sciences. He lives in New York.
Loading...
or
Not Currently Available for Direct Purchase