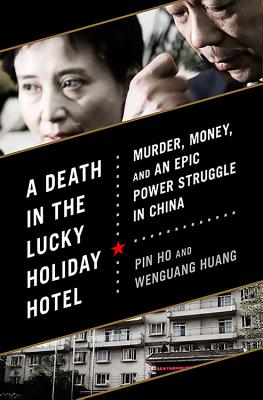 A Death in the Lucky Holiday Hotel

Murder, Money, and an Epic Power Struggle in China

The downfall of Bo Xilai in China was more than a darkly thrilling mystery. It revealed a cataclysmic internal power struggle between Communist Party factions, one that reached all the way to China's new president Xi Jinping.

The scandalous story of the corruption of the Bo Xilai family -- the murder of British businessman Neil Heywood; Bo's secret lovers; the secret maneuverings of Bo's supporters; the hasty trial and sentencing of Gu Kailai, Bo's wife -- was just the first rumble of a seismic power struggle that continues to rock the very foundation of China's all-powerful Communist Party. By the time it is over, the machinations in Beijing and throughout the country that began with Bo's fall could affect China's economic development and disrupt the world's political and economic order.

Pin Ho and Wenguang Huang have pieced together the details of this fascinating political drama from firsthand reporting and an unrivaled array of sources, some very high in the Chinese government. This was the first scandal in China to play out in the international media -- details were leaked, sometimes invented, to non-Chinese news outlets as part of the power plays that rippled through the government. The attempt to manipulate the Western media, especially, was a fundamental dimension to the story, and one that affected some of the early reporting. A Death in the Lucky Holiday Hotel returns to the scene of the crime and shows not only what happened in Room 1605 but how the threat of the story was every bit as important in the life and death struggle for power that followed. It touched celebrities and billionaires and redrew the cast of the new leadership of the Communist Party. The ghost of Neil Heywood haunts China to this day.

Praise For A Death in the Lucky Holiday Hotel: Murder, Money, and an Epic Power Struggle in China…

Publishers Weekly
“This deeply knowledgeable account of the rise and fall of regional Communist Party boss Bo Xilai (whose wife, Gu Kailai, was convicted of Heywood's murder) by veteran journalists Ho and Huang reveals the weaknesses of top party leadership…. The authors unravel the myriad threads of politburo-level power struggles—which make the Borgias look like rank amateurs—weaving together a narrative that includes obscene wealth and corruption, orgies, and totaled Ferraris on the streets of Beijing. This expert account is bolstered by the authors' willingness to admit that the story is so complex that ‘unless Heywood's spirit can find a medium, the whole truth about the November 15 murder may never be known.'”

Winnipeg Free-Press
“The authors have done an admirable job of sorting through the contradictions, half-truths and outright lies perpetrated by all the players in this drama. Their careful research and meticulous explanations will help everyone from general readers to veteran China-watchers sort out the meaning of Bo Xilai's rise and fall.”

Library Journal
“The light this book shines on the secretive world of Chinese politics makes it an especially important work. A must read for all China watchers; those interested in real-life murder mysteries and complex political scheming will also find it fascinating."

Howard French, Wall Street Journal
“The most revealing work on the Bo episode to date. What emerges is an immensely complicated tale of behind-the-scenes power struggles as full of scandal, ambition and betrayal as anything that ancient history has to offer…. The authors' account has the considerable merit of understanding that the surface plot built around Heywood's murder isn't the most interesting element in this narrative. They show how Mr. Bo's undoing had its roots in the country's intense but normally invisible factional jousting…. The narrative is thrilling and believable, based as it is on the information that Chinese officials leak to the press as part of their infighting…. The overall picture of elite politics in China is a devastating one of wanton ambition and lawlessness.”

The Atlantic
“A gripping telling of the incident that would make for a great thriller novel—if it weren't all true.”

Maclean's
“As a lurid tale of wealthy and powerful people behaving badly, the authors' account of what has been unfolding in China since November 2011 can't be beat.”

Kirkus
“A true-crime murder mystery from 2011 set in a remote Chinese city, with an outsized impact on governance of the vast nation…. The authors weave a fascinating, dark narrative web.”

Pin Ho, a journalist and writer, is the founder of Mirror Media Groups and has covered Chinese politics for twenty-five years. He broke the news on leadership lineups for three consecutive Communist Party Congresses since 2002. His book, China's Princelings, was the first to coin that phrase to describe the children of Chinese revolutionaries, and is the source for much that has appeared in the accounts of various Western journalists.

Wenguang Huang is a writer, journalist, and translator whose articles and translations have been published in the New York Times, the Chicago Tribune, the Paris Review, and the Christian Science Monitor. He is most recently the author of the memoir The Little Red Guard and the translator for Liao Yiwu's For a Song and One Hundred Songs, The Corpse Walker, and God Is Red.
Loading...
or support indie stores by buying on