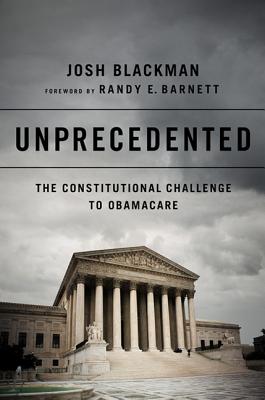 The Constitutional Challenge to Obamacare

In 2012, the United States Supreme Court became the center of the political world. In a dramatic and unexpected 5-4 decision, Chief Justice John Roberts voted on narrow grounds to save the Affordable Care Act, commonly known as Obamacare. Unprecedented tells the inside story of how the challenge to Obamacare raced across all three branches of government, and narrowly avoided a constitutional collision between the Supreme Court and President Obama.

On November 13, 2009, a group of Federalist Society lawyers met in the Mayflower Hotel in Washington, D.C., to devise a legal challenge to the constitutionality of President Obama's "legacy" -- his healthcare reform. It seemed a very long shot, and was dismissed peremptorily by the White House, much of Congress, most legal scholars, and all of the media. Two years later the fight to overturn the Affordable Care Act became a political and legal firestorm. When, finally, the Supreme Court announced its ruling, the judgment was so surprising that two cable news channels misreported it and announced that the Act had been declared unconstitutional.

Unprecedented offers unrivaled inside access to how key decisions were made in Washington, based on interviews with over one hundred of the people who lived this journey -- including the academics who began the challenge, the attorneys who litigated the case at all levels, and Obama administration attorneys who successfully defended the law. It reads like a political thriller, provides the definitive account of how the Supreme Court almost struck down President Obama's "unprecedented" law, and explains what this decision means for the future of the Constitution, the limits on federal power, and the Supreme Court.

Praise For Unprecedented: The Constitutional Challenge to Obamacare…

“Blackman has written a deeply researched, highly readable account of the conservative challenge to the ACA, which, as a recent law graduate, he witnessed from the inside.” — American Prospect

“A young legal scholar delivers an impressive blow-by-blow account of the court battle to defeat the Affordable Care Act… With his strong connections among the conservative and libertarian lawyers who mounted the constitutional challenge and his talent for translating arcane legal-speak, Blackman more than capably captures this dramatic constitutional showdown.” — Kirkus Reviews

“Blackman, law professor, blogger, and representative of a coalition of independent business interests opposed to the program, spent more than two years following the legislative process that produced Obamacare and the legal challenges to the program. Blackman argues that the process was unprecedented in many ways… Blackman also explores the significance of the decision as a galvanizing issue for conservatives and future implications for challenges to government power.” — Booklist

“Blackman does a stellar job of calling out both parties for their flip-flopping with respect to the individual mandate.” — Publishers Weekly

Josh Blackman is an assistant professor of law at the South Texas College of Law and president of the Harlan Institute, a nonprofit dedicated to raising awareness about the Supreme Court and the Constitution. He has published over a dozen law review articles about constitutional law, written numerous op-eds, and been interviewed about the Supreme Court by the New York Times, CNN, ABC News Radio, Reuters, the National Law Journal, the American Bar Association Journal, and Yahoo! News. The American Bar Association Journal selected his personal blog as one of its top 100 Legal Blogs. He also runs FantasySCOTUS.net.
Loading...
or support indie stores by buying on