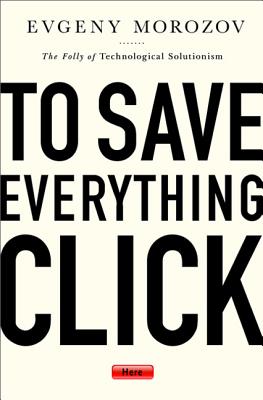 The Folly of Technological Solutionism

In the very near future, "smart" technologies and "big data" will allow us to make large-scale and sophisticated interventions in politics, culture, and everyday life. Technology will allow us to solve problems in highly original ways and create new incentives to get more people to do the right thing. But how will such "solutionism" affect our society, once deeply political, moral, and irresolvable dilemmas are recast as uncontroversial and easily manageable matters of technological efficiency? What if some such problems are simply vices in disguise? What if some friction in communication is productive and some hypocrisy in politics necessary? The temptation of the digital age is to fix everything -- from crime to corruption to pollution to obesity -- by digitally quantifying, tracking, or gamifying behavior. But when we change the motivations for our moral, ethical, and civic behavior we may also change the very nature of that behavior. Technology, Evgeny Morozov proposes, can be a force for improvement -- but only if we keep solutionism in check and learn to appreciate the imperfections of liberal democracy. Some of those imperfections are not accidental but by design.

Arguing that we badly need a new, post-Internet way to debate the moral consequences of digital technologies, To Save Everything, Click Here warns against a world of seamless efficiency, where everyone is forced to wear Silicon Valley's digital straitjacket.

Praise For To Save Everything, Click Here: The Folly of Technological Solutionism…

“Evgeny Morozov calls himself a ‘digital heretic,' and he is right to do so.  Against the reigning consensus—that there is a digital fix for every social and political problem, and that thanks to the technologies that we group together for convenience's sake as the Internet, the brave new world of the future will be one of endless, limitless improvement in every realm of life—Morozov offers a sophisticated, eloquent, and definitive rebuttal.  Technological ‘solutionism,' he argues, is the romantic utopia of our age, and, like Communism or the free market fantasies of Reagan and Thatcher before it, it is one more god doomed to fail. In our ahistorical, gadget obsessed, and self-regarding age, Morozov's skeptical, modest humanism will doubtless engender fierce resistance.  But  then, that is the tribute that self-delusion has always paid to reason.  Voltairean in its  lucidity, To Save Everything, Click Here is not just a brilliant book, it is a necessary one.”


Toomas Hendrik Ilves, President of the Republic of Estonia

“When it comes to anything ‘internet' related, Evgeny Morozov is the writer who brings us  back to earth. Lubricated by snake oil, too much of what we read about the internet and the possibilities offered by modern technology is hypertext hyperbole.  In this riotous  read, Morozov continues his quest to restore empirical rationality in our own thinking  about our techno-utopian pipe-dreams.  We have become gullible to what Morozov calls solutionism, the idea that whatever complex situation we face, we can solve it simply by  finding the right algorithm, and thanks to technology we can find a solution.  We have  seen this before, with Condorcet and other thinkers of the Enlightenment, but then, as  now, too much reliance on mathematics when we are dealing with problems of people and  society leads inevitably to failure.  Today, we who live, work, and dream in cyberspace need  Morozov to keep our feet firmly planted on Terra Firma.”

Richard Sennett, author of The Craftsman

“This hard-hitting book argues people have become enslaved to the machines they use to communicate.  It is incisive and beautifully written; whether you agree with Morozov or not, he will make you think hard."

"For the brilliant dissident Evgeny Morozov, computers are like broken beach-toys on the dark, historic tides of power politics.  His new book should be bound in sandpaper and used to abrade the works of other Internet pundits."


Nassim Nicholas Taleb, distinguished professor of risk engineering at NYU-Polytechnic and author of The Black Swan and Antifragile

"A clear voice of reason and critical thinking in the middle of today's neomania.”


David Rieff, author of A Bed For the Night: Humanitarianism in Crisis

Evgeny Morozov (@evgenymorozov) is the author of The Net Delusion: The Dark Side of Internet Freedom, a New York Times Notable Book of 2011 and winner of Harvard's Kennedy School's 2012 Goldsmith Book Prize. He is a senior editor to the New Republic. His articles have appeared in the New York Times, the Financial Times, the Economist, the Wall Street Journal, the London Review of Books, and many other publications. His monthly column comes out in Slate, Frankfurter Allgemeine Zeitung (Germany), El Pais (Spain), Corriere della Sera (Italy), and several other newspapers. He was born in Belarus.
Loading...
or support indie stores by buying on
(This book is on backorder)