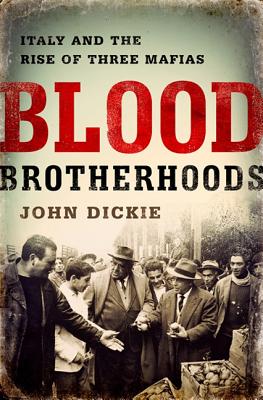 A History of Italy’s Three Mafias

The Sicilian mafia, known as Cosa Nostra, is far from being Italy's only dangerous criminal fraternity. The country hosts two other major mafias: the camorra from Naples; and, from the poor and isolated region of Calabria, the mysterious 'ndrangheta, which has now risen to become the most powerful mob group active today.

Since they emerged, the mafias have all corrupted Italy's institutions, drastically curtailed the life-chances of its citizens, evaded justice, and set up their own self-interested meddling as an alternative to the courts. Yet each of these brotherhoods has its own methods, its own dark rituals, its own style of ferocity. Each is uniquely adapted to corrupt and exploit its own specific environment, as it collaborates with, learns from, and goes to war with the other mafias.

Today, the shadow of organized crime hangs over a country racked by debt, political paralysis, and widespread corruption. The 'ndrangheta controls much of Europe's wholesale cocaine trade and, by some estimates, 3 percent of Italy's total GDP. Blood Brotherhoods traces the origins of this national malaise back to Italy's roots as a united country in the nineteenth century, and shows how political violence incubated underworld sects among the lemon groves of Palermo, the fetid slums of Naples, and the harsh mountain villages of Calabria.

Blood Brotherhoods is a book of breathtaking ambition, tracing for the first time the interlocking story of all three mafias from their origins to the present day. John Dickie is recognized in Italy as one of the foremost historians of organized crime. In these pages, he blends archival detective work, passionate narrative, and shrewd analysis to bring a unique criminal ecosystem -- and the three terrifying criminal brotherhoods that have evolved within it -- to life on the page.

Praise For Blood Brotherhoods: A History of Italy’s Three Mafias…

“Dickie's absorbing history of the Italian mob makes The Godfather look like a fairy tale… These ‘men of honor' and ‘lads with attitude' created their own myths. Until Dickie's revelatory book, most believed them.”—Kirkus starred review

"Dickie's extremely well-researched book has an extensive list of (mostly Italian) sources and covers the history and geography of Italy and provides historical analysis. He writes clearly and cleverly.”—Library Journal

John Dickie is Professor of Italian Studies at University College, London. His book, Cosa Nostra: A History of the Sicilian Mafia, is an international bestseller, with over twenty translations, and won the CWA Dagger Award for non-fiction. Since then he has published Delizia! The Epic History of the Italians and their Food (2007) -- now a six-part TV series for History Channel Italia and other networks worldwide. In 2005 the President of the Italian Republic appointed him a Commendatore dell'Ordine della Stella della SolidarietÃ taliana. He lives in London.
Loading...
or support indie stores by buying on