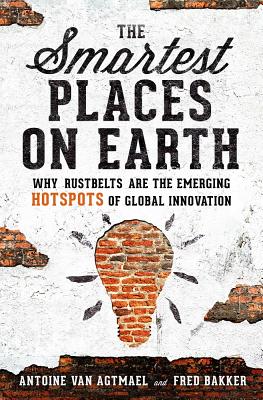 The Smartest Places on Earth

Why Rustbelts Are the Emerging Hotspots of Global Innovation

The remarkable story of how rustbelt cities such as Akron and Albany in the United States and Eindhoven in Europe are becoming the unlikely hotspots of global innovation, where sharing brainpower and making things smarter -- not cheaper -- is creating a new economy that is turning globalization on its head

Antoine van Agtmael and Fred Bakker counter recent conventional wisdom that the American and northern European economies have lost their initiative in innovation and their competitive edge by focusing on an unexpected and hopeful trend: the emerging sources of economic strength coming from areas once known as "rustbelts" that had been written off as yesterday's story.

In these communities, a combination of forces -- visionary thinkers, local universities, regional government initiatives, start-ups, and big corporations -- have created "brainbelts." Based on trust, a collaborative style of working, and freedom of thinking prevalent in America and Europe, these brainbelts are producing smart products that are transforming industries by integrating IT, sensors, big data, new materials, new discoveries, and automation. From polymers to medical devices, the brainbelts have turned the tide from cheap, outsourced production to making things smart right in our own backyard. The next emerging market may, in fact, be the West.

Praise For The Smartest Places on Earth: Why Rustbelts Are the Emerging Hotspots of Global Innovation…

“This book upends conventional wisdom about how the global economy works and which places are primed to thrive and prosper. Van Agtmael and Bakker capture the complex market dynamics that are revaluing the formidable assets of U.S. and European older industrial cities: advanced industries and networks of universities, companies and governments that collaborate to compete. These are refreshing insights that build on real world experience and evidence rather than antiquated group think.” –Bruce Katz, Brookings Institution Centennial Scholar and co-author of The Metropolitan Revolution

"The authors offer a compelling and insightful look at how companies and communities are turning ashes into silicon valleys." –Harold L. Sirkin, Senior Partner, The Boston Consulting Group (BCG)

“The riveting story of how failing rustbelts in the Unites States and Northern Europe have transformed themselves into emerging brainbelts through the triumph of collaboration and ingenuity to become promising models of bottom-up innovation.” –Hilda Ochoa-Brillembourg, Founder and Chairman, Strategic Investment Group

"An absolutely fascinating tour of cities in the United States and Europe that were once traditional centers of manufacturing which are now reinventing themselves as hubs of innovation. If you want to understand how economies at the local level can transform themselves, this is the book to read." –Liaquat Ahamed, author of Lords of Finance

“van Agtmael and Bakker paint an exciting picture of the future based on progress made possible by cooperative processes they call 'brainsharing.' Citing unheralded developments in specific places and specific industries, this extraordinarily well researched book challenges the conventional view of a developed world in relative decline. The authors make a compelling case for the role of connectors, who bring together a diverse collection of players required for collaborative success. This compellingly argued and lucidly written book is a must read for anyone who cares about the future of the planet.” –David F. Swensen, Chief Investment Officer at Yale University

“A lively, lucid story of innovation and transformation powered by brainpower and business, academe, and regional governments working together…. The smartest book on one of the most important and promising trends in the American and global economy.” –Strobe Talbott, President of The Brookings Institution

"In every chapter of economic history, unexpected places have cultivated the dynamism that transforms society at large. Antoine van Agtmael and Fred Bakker describe how the next generation of emerging hotspots are located in unlikely places, as industry connects with the energy of universities and academic medical centers to transform rustbelts into 'brainbelts.' This scouting report will interest students of the future taking shape today." –Dick Brodhead, President of Duke University

"This eye-opening account of innovation in unlikely places will raise the spirits of anyone discouraged by the gurus who keep telling us the future belongs not to the established democracies of the capitalist world, but to emerging powers mostly in Asia. No, Van Agtmael and Bakker tell us, the 'smartest places on earth' may be in little-heralded cities in the United States and northern Europe, where business people, scientists and creative managers are inventing smart new products and ingenious new ways to manufacture them. They tell us that many of the old economies of the developed world 'are entering a revolutionary new phase' because 'the global competitive advantage is shifting from cheap to smart.' I found their arguments, and the facts they have gathered to support them, both intriguing and convincing. And their book is fun to read." –Robert G. Kaiser, former Managing Editor of the Washington Post

“Energetic…. Offers a hopeful perspective on how imaginative economies can become pacesetters in the fast-forward Knowledge Economy…. Longlisted for the Financial Times/McKinsey Business Book of the Year Award, SMARTEST PLACES is receiving well-deserved attention among corporate leaders and financial strategists – and it ought to be required reading for every would-be policymaker.” —WorldBank.org

“The book contains an abundance of insightful information…. A strong selection for those interested in high-tech industries or community economic revival.” —Library Journal

“The perspective here on the transformation of 'rustbelts' into 'brainbelts' has an outsider's freshness toward America and an international expansiveness…Akron glitters like never before in these illuminating pages.” —Kirkus Reviews

“The authors make a strong case that a renaissance in the development and manufacturing of ‘chips, new materials, and biosciences' is happening not in tech or major urban centers, but in reclaimed factories and settings like the revitalized American Tobacco Campus in the North Carolina Research Triangle. For anyone looking at trends in technology or manufacturing, or at the future of global business, this insightful work will provide food for thought.” —Publishers Weekly

Antoine van Agtmael is a senior adviser at Garten Rothkopf, a public policy advisory firm in Washington, DC. Previously, he was a founder, CEO, and CIO of Emerging Markets Management LLC; a deputy director of the capital markets department of the International Finance Corporation (IFC), the private sector oriented affiliate of the World Bank; and a division chief in the World Bank's borrowing operations. He was an adjunct professor at Georgetown Law Center and taught at the Harvard Institute of Politics.

Alfred Bakker, until his recent retirement, was a journalist specializing in monetary and financial affairs with Het Financieele Dagblad -- the Financial Times of Holland -- serving as deputy editor, editor in chief, and CEO. In addition to his writing and editing duties he helped develop the company from a newspaper publisher to a multimedia company, developing several websites, a business news radio channel, and a quarterly business magazine, FD Outlook, and was responsible for the establishment of FD Intelligence.
Loading...
or
Not Currently Available for Direct Purchase