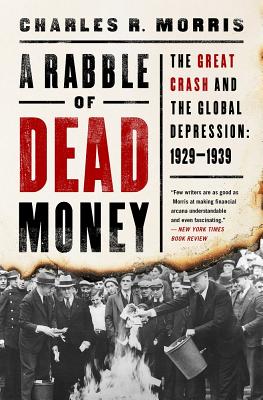 A Rabble of Dead Money (Hardcover)

The Great Crash of 1929 profoundly disrupted the United States' confident march toward becoming the world's superpower. The breakneck growth of 1920s America -- with its boom in automobiles, electricity, credit lines, radio, and movies -- certainly presaged a serious recession by the decade's end, but not a depression. The totality of the collapse shocked the nation, and its duration scarred generations to come.

In this lucid and fast-paced account of the cataclysm, award-winning writer Charles R. Morris pulls together the intricate threads of policy, ideology, international hatreds, and sheer individual cantankerousness that finally pushed the world economy over the brink and into a depression. While Morris anchors his narrative in the United States, he also fully investigates the poisonous political atmosphere of postwar Europe to reveal how treacherous the environment of the global economy was. It took heroic financial mismanagement, a glut-induced global collapse in agricultural prices, and a self-inflicted crash in world trade to cause the Great Depression.

Deeply researched and vividly told, A Rabble of Dead Money anatomizes history's greatest economic catastrophe -- while noting the uncanny echoes for the present.

Charles R. Morris has written fifteen books, including The Coming Global Boom, a New York Times Notable Book; The Tycoons, a Barron's Best Book of 2005; and The Trillion Dollar Meltdown, winner of the Gerald Loeb Award and a New York Times bestseller. His recent book, The Dawn of Innovation, was named a Wall Street Journal Best Business Book of 2012. A lawyer and former banker, Morris's articles and reviews have appeared in many publications, including the Atlantic Monthly, New York Times, and Wall Street Journal.

Praise For A Rabble of Dead Money: The Great Crash and the Global Depression: 19291939…

"A Rabble of Dead Money is a deft synthesis, blending colorful accounts of the past with the scholarly literature of the present. It may not be the last word on the Great Depression, but it is hard to imagine a more accessible and entertaining introduction to the subject."—New York Times Book Review

"A great and informative read about a singularly important era in world history."—Wall Street Journal

"Both neophytes and experts will find something provocative and rewarding in this unfailingly interesting treatment."—Kirkus Reviews


"Sprightly...Morris is at his best when writing about economic matters, alerting readers to the latest, most authoritative thinking about the causes and realities of the Great Depression."—Publishers Weekly


"Charles Morris wrote a superb book on the Great Financial Crisis of 2007-8 and now, armed with those insights, he returns and takes us back in time to illuminate the causes of the Great Depression. Looking at the present armed with the lessons of the past, and looking at the distant past armed with the insights of recent history, Morris makes a timeless contribution to our understanding of how, in each crisis, the fallibility of leaders is revealed when uncertainty overwhelms the yearning for order, and how the blind spots revealed are the heart of the tragic flaws of each tale."
—Robert Johnson, President, Institute for New Economic Thinking

"Morris has masterfully combined the work of historians along with the results of the latest research in economics and economic history. His narrative offers original perspectives on many important issues."
—Alexander J. Field, author of A Great Leap Forward: 1930s Depression and US Economic Growth

"As entertaining as it is scholarly, this fresh look at the causes and consequences of the Great Depression by one of the world's leading economic historians imparts timely lessons in the age of the Great Recession. It is a book I will reread for years, I'm sure."
—Michael Lind, author of Land of Promise: An Economic History of the United States

"A Rabble of Dead Money is a lucid guide through the political and ideological thickets of the Great Depression, beautifully written and full of original insights."
—Charles H. Ferguson, director, Academy Award winner for Inside Job
or
Not Currently Available for Direct Purchase
Copyright © 2020 American Booksellers Association