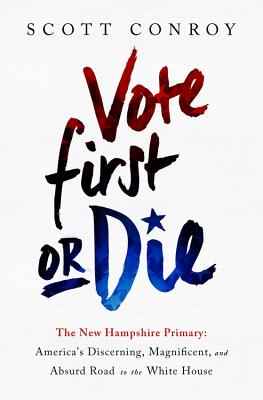 New Hampshire-a small state with a small, distinct population-is nevertheless the beacon of American democracy. Since 1920, its residents have been the first in the nation to cast their votes in the presidential primaries. History has shown that if you want to be commander in chief, you have to win, or at least place a strong second, in New Hampshire. Donald Trump bolstered the trend with his victory in 2016.

For that reason, the state is also the graveyard of political ambitions: incumbent presidents Harry Truman, Lyndon Johnson, Gerald Ford, and George H. W. Bush were all wounded by strong primary challengers in New Hampshire--and well-known, well-funded candidates see the White House disappear when they can't figure out how to win it.

For a year and a half leading up to Primary Day, Scott Conroy followed the often absurd 2016 campaign up and down New Hampshire. Along the way, he got up close and personal with the candidates themselves, while absorbing local insights and entertaining anecdotes from the peppery state officials and wily operatives who have determined national political fates for generations. From far-flung towns like Dixville Notch and Berlin to "big cities" like Manchester and Portsmouth, in Vote First or Die, Conroy reveals the inner workings of American politics through the unforgettable characters who populate the exceedingly influential state of New Hampshire.

Scott Conroy is the co-creator and executive producer of Embeds on Verizon's Go90 platform. Previously, he worked with Vice to launch its nightly news show on HBO. He is coauthor of Sarah from Alaska and created and directed New Hampshire, a seven-part Huffington Post original documentary series about life on the 2016 trail. Follow him on Twitter: @ScottFConroy


Praise For Vote First or Die: The New Hampshire Primary: Americas Discerning, Magnificent, and Absurd Road to the White House…

"Scott Conroy has produced a thoughtful, engaging and at times hilarious deep dive into the political soul of America's first primary state. Topical in any era, Vote First or Die is particularly relevant in understanding the roiling discontents of Granite Staters that gave rise to Donald Trump's first-ever electoral victory."
—Robert Draper, author of Do Not Ask What Good We Do: Inside The House of Representatives and Dead Certain: The Presidency of George W. Bush

"A mix of Bill Bryson and Mark Leibovich-affectionate, hard-headed, laugh-out-loud funny, and always deeply informed. New Hampshire is the perfect stage for Scott Conroy's safari through the strange magic and frailty of a presidential campaign."
—Evan Osnos, author of Age of Ambition: Chasing Fortune, Truth, and Faith in New China

"As a reporter who chronicled my first New Hampshire primary in 1980, I love Scott Conroy's rollicking appreciation of the crown jewel of American democracy. Equally compelling and often funny are Conroy's anecdotes from the NH campaigns that he covered from John McCain to a fellow named Trump."
—Walter Shapiro, columnist for Roll Call and author of One-Car Caravan: On the Road with the 2004 Democrats before America Tunes In

"Conroy can sting nicely...not letting anyone come out unscathed. ...A quirky, well-observed account of how electoral politics works."—Kirkus Reviews
or support indie stores by buying on
Copyright © 2020 American Booksellers Association