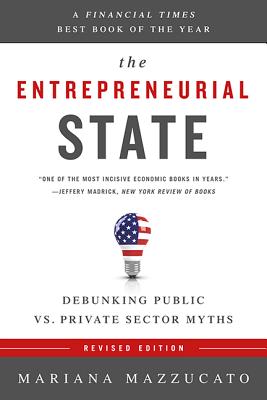 The world's most popular products, from the iPhone to Google Search, were funded not by private companies, but the taxpayer.

In this sharp and controversial international bestseller, an award-winning economist debunks the pervasive myth that the government is sluggish and inept, and at odds with a dynamic private sector. She reveals in detailed case studies that the opposite is true: the state is, and has been, our boldest and most valuable innovator. Denying this history is leading us down the wrong path. A select few get credit for what is an intensely collective effort, and the US government has started disinvesting from innovation. The repercussions could stunt economic growth and increase inequality. Mazzucato teaches us how to reverse this trend before it is too late.

A Financial Times, Forbes, and Huffington Post Best Book of the Year

"Mazzucato argues that long-term, patient government funding is an absolute prerequisite for breakthrough innovation.Even if you disagree with Mazzucato's argument, you should read her book. It will challenge your thinking."
—Bruce Upbin, Forbes

"It is one of the most incisive economic books in years."
—Jeffery Madrick, New York Review of Books

"Ms. Mazzucato is right to argue that the state has played a central role in producing game-changing breakthroughs, and that its contribution to the success of technology-based businesses should not be underestimated."
—The Economist

"A meticulously argued treatise that shows how unwise our conventional wisdom has become."
—Christopher Dickey, Newsweek

"A skillful combination of the history of technology, empirical evidence, and policy analysis--the book contains a critical reading of data and arguments that run counter to established views while never falling short of offering constructive solutions."
—Davide Consoli, Science

"Makes an engaging, persuasive case in favor of the state, and suggests one recommend it not just as an instrument of market repair but also as a prerequisite for future prosperity."
—J. Bhattacharya, Choice

"In this trailblazing book on the role of government as both a risk-taking funder of innovation and a market creator, Mariana Mazzucato persuasively argues that the government is a key enabler of technological innovations that drive economic growth. This important book should be read by policymakers, opinion leaders, and others with a stake in funding economic growth."
—Arnold T. Davis, CFA Institute

"Provides a refreshing new take on rather stale debates on the economic role of government."
—Globe and Mail (UK)

Mariana Mazzucato is professor in the Economics of Innovation and Public Value at University College London (UCL), where she directs the Institute for Innovation and Public Purpose. She is the winner of the 2014 New Statesman SPERI Prize for Political Economy, the 2015 Hans-MatthÃ¶-Preis, and the 2018 Leontief Prize for Advancing the Frontiers of Economic Thought. She was named as one of the "three most important thinkers about innovation" by the New Republic.

She advises global policy makers on innovation-driven inclusive growth and is Special Advisor to the EU commissioner for research, science and innovation. She is a coeditor of Rethinking Capitalism: Economics and Policy for Sustainable and Inclusive Growth and the author of the award-winning The Entrepreneurial State: Debunking Public vs. Private Sector Myths.
Loading...
or support indie stores by buying on