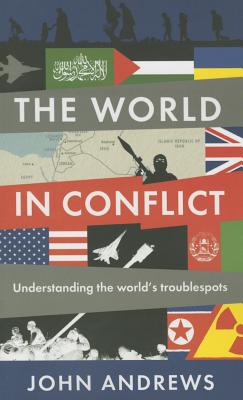 The World in Conflict

In the last decade, the USA and its allies have invaded Afghanistan; Russia has sent troops into Ukraine; Britain and France helped topple a regime in Libya; the militant group ISIS has emerged in the Middle East; and across West Africa, the quest for precious minerals has both financed and caused conflicts.

Other conflicts are less bloody, but still dangerous -- the nervous stand-off between India and Pakistan in Kashmir, for instance, or the continuing stalemate between nuclear-armed, totalitarian North Korea and capitalist, democratic South Korea. Can we be truly confident that these arguments will not lead to armed conflict -- whether by design or by human error?

In The World in Conflict, John Andrews tackles head-on the reasons why global conflict is an ever-present in our lives. He analyses today's conflicts continent by continent, considering the causes, participants, impact and likely outcomes. He looks at recently-ended wars that remain prone to intermittent fighting. And, crucially, he considers where, why and how new conflicts might erupt.

This is a book for our times, an essential guide for anyone and everyone who wants to know more about the world's main danger spots and how and why war and terrorism persist -- in short, how we might better understand our world in conflict.

John Andrews has written for the Economist for almost thirty years. His career as a journalist began in the Middle East, and his postings with the Economist have ranged from Singapore and Hong Kong, to Washington, Los Angeles, Brussels and Paris. He is the author of two books on Asia and The Economist Book of Jsms, co-author of a book on Europe and co-editor of Megachange: The World in 2050. He now divides his time between London and Provence.
Loading...
or support indie stores by buying on
(This book is on backorder)