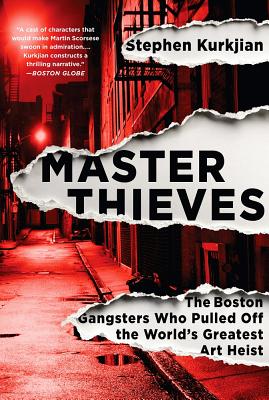 The Boston Gangsters Who Pulled Off the World's Greatest Art Heist

The definitive story of the greatest art theft in history, as seen in the Netflix documentary "This is a Robbery."


In a secret meeting in 1981, a low-level Boston thief gave career gangster Ralph Rossetti the tip of a lifetime: the Isabella Stewart Gardner Museum was a big score waiting to happen. Though its collections included priceless artworks by Rembrandt, Vermeer, Degas, and others, its security was cheap, mismanaged, and out of date. And now, it seemed, the whole Boston criminal underworld knew it.

Nearly a decade passed before the Museum was finally hit. But when it finally happened, the theft quickly became one of the most infamous art heists in history: thirteen works of art valued at up to 500 million, by some of the most famous artists in the world, were taken. The Boston FBI took control of the investigation, but twenty-five years later the case is still unsolved and the artwork is still missing.

Stephen Kurkjian, one of the top investigative reporters in the country, has been working this case for over nearly twenty years. In Master Thieves, he sheds new light on some of the Gardner's most abiding mysteries. Why would someone steal these paintings, only to leave them hidden for twenty-five years? And why, if one of the top crime bosses in the city knew about this score in 1981, did the theft happen in 1990? What happened in those intervening years? And what might all this have to do with Boston's notorious gang wars of the 1980s?

Kurkjian's reporting is already responsible for some of the biggest breaks in this story, including a meticulous reconstruction of what happened at the Museum that fateful night. Now Master Thieves will reveal the identities of those he believes plotted the heist, the motive for the crime, and the details that the FBI has refused to discuss. Taking you on a journey deep into the gangs of Boston, Kurkjian emerges with the most complete and compelling version of this story ever told.


Praise For Master Thieves: The Boston Gangsters Who Pulled Off the World's Greatest Art Heist…

More
than just a summation of all that's publicly known about the case-from the
thieves' false mustaches to the F.B.I.'s sting operation--Kurkjian's book is an
impressive attempt to solve the crime by reconsidering the evidence...gripping."—New York Times Book Review

a cast of characters that would make Martin Scorsese swoon in admiration. There are so many crime-world figures with their fingers in this story that the book is like a 'GoodFellas'/'The Departed'' double feature...Kurkjian constructs a thrilling narrative... A great mystery story well told.—Boston Globe

If you want to go looking for the lost Gardner horde (and collect the $5-million reward the gallery offers for its return), there's no better place to start than the pages of Master Thieves. The museum (and the FBI) could use the help.—Winnipeg Free Press

Stephen Kurkjian is one of the most acclaimed investigative reporters in the country. A veteran of the Boston Globe, he is the paper's former Washington bureau chief and a founding member of its investigative Spotlight Team. Kurkjian has won more than twenty-five national and regional awards including the Pulitzer Prize on three occasions. He is a graduate of Suffolk Law School and lives in Boston.
Loading...
or support indie stores by buying on