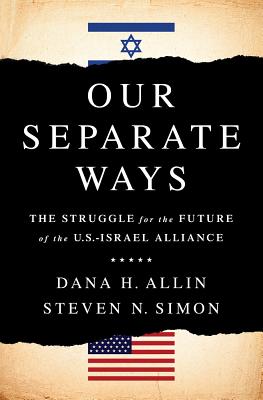 The Struggle for the Future of the U.S.–Israel Alliance

Anger and distrust have strained the U.S.-Israeli alliance as the Obama administration and Netanyahu government have clashed over Israeli settlements, convulsions in the Arab world, and negotiating with Iran. Our Separate Ways is an urgent examination of why the alliance has deteriorated and the dangers of its neglect.

Powerful demographic, cultural, and strategic currents in Israel and the United States are driving the two countries apart. In America, the once-solid pro-Israel consensus is being corroded by partisan rancor, which also pits conservative Jews against the more liberal Jewish majority. In Israel, surveys of young Jewish citizens reveal a disdain for democracy, and, in some cases, a readiness to curb the civil liberties of non-Jews. Prospects for preserving a liberal Zionism against the pressures for "Greater Israel" are dimming as hopes for a two-state solution fade.

The acrimony between President Barack Obama and Prime Minister Benjamin Netanyahu has been a symptom, not cause, of the deeper crisis. If the alliance becomes just a transactional arrangement, then the moral, emotional, and largely intangible bonds that have long tied the two countries together will continue to weaken. Going separate ways at a time of Middle East chaos, and despite profound historical commitment, would be an immense tragedy. The partnership must restore the shared vision that created it.

Praise For Our Separate Ways: The Struggle for the Future of the U.S.–Israel Alliance…

“Combining political and historical expertise with an approachable, engaging tone…the book will appeal to both casual readers interested in current events in the Middle East and those with a more extensive background in the region. An impassioned, learned plea for the importance of shared values, rather than coldhearted calculations, as the basis of diplomacy.” —Kirkus Reviews

“Our Separate Ways is essential reading—a revelatory inside account of the U.S.-Israeli alliance in the Obama years and a searching, insightful analysis of the spreading fissures in that alliance. Anyone concerned about the future of U.S.-Israeli relations should read this book.” —Steve Coll, dean of the Graduate School of Journalism, Columbia University, and staff writer, New Yorker

“For an Israeli who believes that American support is crucial to my country's safety and well-being, Our Separate Ways is a painful wake-up call from two close friends. And for a journalist who has watched the turmoil and tempests of the Obama-Netanyahu years, it is an unmatched source of inside knowledge and sharp analysis.” —Aluf Benn, editor in chief, Haaretz

Steven Simon is a diplomat and policymaker. He previously served as a senior director for Middle Eastern and North African affairs at the White House, advising President Obama during a most difficult period in US-Israeli relations and with the tumultuous changes of the Arab Spring. He is coauthor of The Age of Sacred Terror (Random House, 2002), which won the 2004 Arthur Ross Book Award for best book on international relations; coeditor of Iraq at the Crossroads: State and Society in the Shadow of Regime Change (Oxford University Press, 2003), coauthor of Building a Successful Palestinian State (RAND Corporation, 2005), The Arc: A Formal Structure for a Palestinian State (RAND Corporation, 2005), and coauthor of The Next Attack (Henry Holt, 2005), which examined the evolution of the jihad since September 11, 2001, and America's response, and which was a finalist for the Lionel Gelber Prize in 2006.

Dana Allin is a senior fellow for US Foreign Policy and Transatlantic Affairs at the International Institute for Strategic Studies (IISS). His published work includes Cold War Illusions: America, Europe and Soviet Power, 1969-1989 (St. Martin's Press, 1995), NATO's Balkan Interventions (Oxford University Press for the IISS, 2002), Repairing the Damage: Possibilities and Limits of Transatlantic Consensus (Routledge for the IISS, 2007), and Weary Policeman: American Power in an Age of Austerity (Routledge for the IISS, 2012). Under Allin's editorship, the IISS journal Survival: Global Politics and Strategy has been one of the most highly regarded publications in the field of international relations and strategy.
Loading...
or support indie stores by buying on