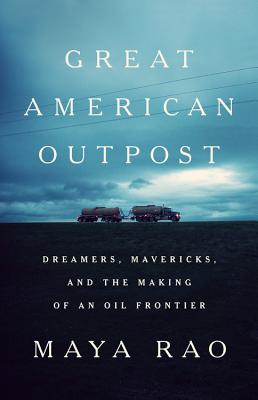 As North Dakota became the nation's second-largest oil producer, Maya Rao set out in steel-toe boots to join a wave of drifters, dreamers, entrepreneurs, and criminals. With an eye for the dark, absurd, and humorous, Rao fearlessly immersed herself in their world to chronicle this modern-day gold rush, from its heady beginnings to OPEC's price war against the US oil industry. She rode shotgun with a surfer-turned-truck driver braving toxic fumes and dangerous roads, dined with businessmen disgraced during the financial crisis, and reported on everyone in between -- including an ex-con YouTube celebrity, a trophy wife mired in scandal, and a hard-drinking British Ponzi schemer--in a social scene so rife with intrigue that one investor called the oilfield Peyton Place on steroids.

Praise For Great American Outpost: Dreamers, Mavericks, and the Making of an Oil Frontier…

"An important addition to the literature of the U.S. shale revolution-too often underestimated and misunderstood-Great American Outpost reminds us that the revolution is not just a story of frack fluid and oil production but a story of the human experience. Through Didionesque scenes of the North Dakota boom, Maya Rao evokes America in extremis with glimpses of lives and decisions that are sometimes frightening, sometimes inspiring, and sometimes just nuts."—--Gary Sernovitz, author of The Green and the Black: The Complete Story of the Shale Revolution, the Fight over Fracking, and the Future of Energy

"From the upper reaches of North Dakota, Maya Rao extracts a potent metaphor for modern American capitalism. Her bracing dispatch from the Bakken reveals the toll of fracking on everything it touches - from the soil of the Great Plains, to the precarious lives of roughnecks, to the remote communities that became boomtowns full of hustlers, dreamers and opportunists. Keenly observed and vividly told, Great American Outpost also has an undercurrent of anxiety that seeps from abandoned oilfields into the larger landscape of our culture, in the form of a question few dare to ask: What remains when the profiteers move on?"—--Jessica Bruder, author of Nomadland: Surviving America in the Twenty-First Century America

"I'm grateful for this stunning work of immersive reportage. Maya Rao tells us a tale from ground zero for modern American capitalism: the North Dakota oil rush, from boom to bust. It's a remarkable book for right now, mixing compelling portraits with smart, big picture analysis. Rao shows us stories that visiting reporters would likely miss, and the result is a rich, nuanced book that's a crucial guide to understanding twenty-first century America."—--Tracie McMillan, author of The American Way of Eating: Undercover at Walmart, Applebee's, Farm Fields and the Dinner Table

"With oil at $100 a barrel, greed in North Dakota was manifest and the characters were right out of the Gold Rush, from some of the craziest get rich crooks to the recently paroled who could make $90,000 a year hurling big trucks down two-lane roads. Maya Rao's description of one of America's biggest rushes of sheer greed ranks right up there with the great books of the California Gold Rush of 1849 ...This is one of the best books in America about working men and women -- and life in the oilfields when the lid blows off."—--Humpy Wheeler, retired NASCAR promoter and former president of Charlotte Motor Speedway

"Maya Rao didn't just write about the boomtown life, she lived it capturing the hope and despair of a nation of citizens looking for a break. A gimlet-eyed look at the oil, dust, and, most importantly, the people living on our country's last frontier. This is essential reading for anyone interested in how the American Dream or the American Nightmare can be made and lost in the blink of a two-week pay period."—--Stephen Rodrick, contributing editor to Rolling Stone

Maya Rao is a staff writer in the Washington D.C. bureau of the Minneapolis Star-Tribune, and her work has appeared in the Atlantic, Awl, Philadelphia Inquirer, Longreads, and more.
Loading...
or
Not Currently Available for Direct Purchase