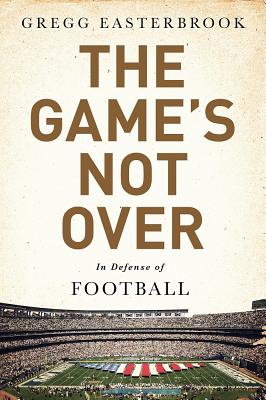 The Game's Not Over (Hardcover)

In Defense of Football

Is there anything more universally American than NFL football?

Love of the NFL runs deep and broad. It is a primetime TV event on multiple national networks, subsidized by public funds and popular from Mount Rainier to Miami Beach. The 2015 Super Bowl, a thriller between the Patriots and Seahawks, was the most-watched program in the history of television, with more than a third of the country watching.

Yet football is in trouble. Public anxiety over football spiked in 2014 during the heat of the Ray Rice domestic violence scandal, the ongoing concussion crisis and the league's appropriations of tax money for its own ends. The mounting problems have led some to question the ethics of watching America's beloved game.

In this sharply argued, witty, observant book, Gregg Easterbrook makes a spirited case in defense of the NFL. As he shows, the league brings together Americans of all stripes, providing a rare space to talk about what matters. Indeed, the various issues we see in the league are often microcosms of the ones we see elsewhere, whether it's suspicion of the rich, or gender politics or even concern over bullying. The NFL's social, economic and legal problems are real, but they also produce some of our best and most valuable discussions of those issues. Football is a magnificent incarnation of our national character. It has many flaws, and they need fixing—but the game's not over.

Gregg Easterbrook is the author of ten books, including The King of Sports, The Progress Paradox, The Leading Indicators and Sonic Boom. He is a contributing editor to the Atlantic and Washington Monthly and a former columnist for ESPN.com. He has been a distinguished fellow of the Fulbright Foundation, a visiting fellow of the Brookings Institution and a political columnist for Reuters.

Praise For The Game's Not Over: In Defense of Football…

“Mr. Easterbrook's analysis suggests that the game is becoming safer even as it becomes more compelling and competitive. The debate over football and its risks will continue, but both NFL fans and foes will enjoy this readable and entertaining book.” –James Freeman, Wall Street Journal

“Conflicted fans might take some solace in Easterbrook's unabashed enthusiasm for the game and its strategies.” –James Sullivan, Boston Globe

“A breezy read that provides cultural context to accompany another football season…It offers comfort to fellow fans that the sport deserves their attention and even their love.” –Kirkus Reviews

"With a distinct voice, Easterbrook makes important observations about the game that will have a broader appeal than just football fans." –Library Journal

“Easterbrook...writes nothing that is not brilliant.” –Chicago Tribune