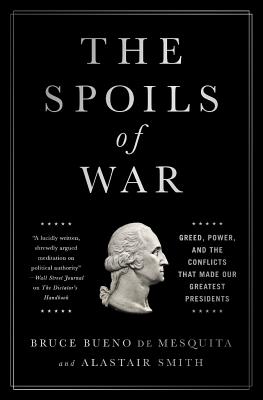 The Spoils of War

Greed, Power, and the Conflicts That Made Our Greatest Presidents

Two eminent political scientists show that America's great conflicts, from the Revolutionary War to the War on Terror, were fought not for ideals, or even geopolitical strategy, but for the individual gain of the presidents who waged them.

It's striking how many of the presidents Americans venerate-Abraham Lincoln, George Washington, Franklin D. Roosevelt, and John F. Kennedy, to name a few-oversaw some of the republic's bloodiest years. Perhaps they were driven by the needs of the American people and the nation. Or maybe they were just looking out for themselves.

This revealing and entertaining book puts some of America's greatest leaders under the microscope, showing how their calls for war, usually remembered as brave and noble, were in fact selfish and convenient. In each case, our presidents chose personal gain over national interest while loudly evoking justice and freedom. The result is an eye-opening retelling of American history, and a call for reforms that may make the future better.

Bueno de Mesquita and Smith demonstrate in compelling fashion that wars, even bloody and noble ones, are not primarily motivated by democracy or freedom or the sanctity of human life. When our presidents risk the lives of brave young soldiers, they do it for themselves.

Praise For The Spoils of War: Greed, Power, and the Conflicts That Made Our Greatest Presidents…

"This entertaining read, which still pushes significant empirical value related to American history and the presidency, leads its audience to question the actual nobility of even the most idolized American presidents. A daring work designed for a wide audience."—CHOICE

Bruce Bueno de Mesquita is the Julius Silver Professor of Politics and director of the Alexander Hamilton Center for Political Economy at New York University. He is the author of sixteen books, including The Predictioneer's Game.

Alastair Smith is professor of politics at New York University. The recipient of three grants from the National Science Foundation and author of three books, he was chosen as the 2005 Karl Deutsch Award winner, given biennially to the best international relations scholar under the age of forty. They are also the authors of The Spoils of War: Greed, Power, and the Conflicts That Made Our Greatest Presidents.
Loading...
or support indie stores by buying on