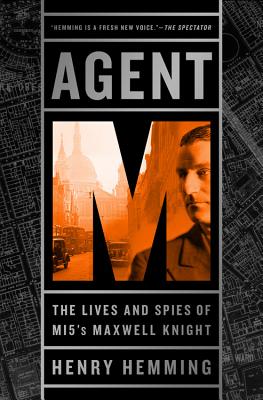 The Lives and Spies of MI5's Maxwell Knight

The fascinating, improbable true story of Maxwell Knight -- the great MI5 spymaster and inspiration for the James Bond character M.

Maxwell Knight was perhaps the greatest spymaster in history. He did more than anyone in his era to combat the rising threat of fascism in Britain during World War II, in spite of his own history inside this movement. He was also truly eccentric -- a thrice-married jazz aficionado who kept a menagerie of exotic pets -- and almost totally unqualified for espionage.

Yet he had a gift for turning practically anyone into a fearless secret agent. Knight's work revolutionized British intelligence, pioneering the use of female agents, among other accomplishments. In telling Knight's remarkable story, Agent M also reveals for the first time in print the names and stories of some of the men and women recruited by Knight, on behalf of MI5, who were asked to infiltrate the country's most dangerous political organizations.

Drawing on a vast array of original sources, Agent M reveals not only the story of one of the world's greatest intelligence operators, but the sacrifices and courage required to confront fascism during a nation's darkest time.

Praise For Agent M: The Lives and Spies of MI5's Maxwell Knight…

"The dramatic story of the remarkable British spymaster...Many spy stories are page-turners, but [Henry Hemming] proves that the story of one man can be equally thrilling. Hemming has uncovered a man determined not to be known and in so doing, has provided us with delightful reading."

"Espionage writing at its best."

"Crammed with cracking stories and founded on sound research, Henry Hemming's biography of Maxwell Knight-'M'-stands comparison with the bestselling books of Ben Macintyre."

"I raced through Henry Hemming's book, constantly having to remind myself that it wasn't a work of fiction. It really has everything you'd want from a great espionage story: incredible agents risking their lives; the highest possible stakes, with the safety of the world hanging in the balance; and at its heart a complicated, mercurial spy master in Maxwell Knight spinning an ever more intricate web."

"Absolute proof that assiduous digging in the archives can produce scoops. This is intelligence research at its best, especially in the identification of hitherto anonymous agents. Definitely a great contribution to the literature."

"This in-depth introduction illuminates a largely forgotten man of antidemocratic tendencies who played a key role in keeping Britain secure and democratic for much of the interwar and early postwar periods."—Publishers Weekly

Henry Hemming is the author of five works of nonfiction including Agent M and The Ingenious Mr Pyke, which landed on the New York Times monthly espionage bestseller list. He has written for the Sunday Times, Daily Telegraph, Daily Mail, the Times, the Economist, FT Magazine, and the Washington Post, and has given interviews on Radio 4's Today Programme and NBC's Today Show and spoken at schools, festivals and companies including RDF Media, The RSA, Science Museum, Frontline Club, and The School of Life. Henry lives in London with his wife, daughter and son.
Loading...
or
Not Currently Available for Direct Purchase