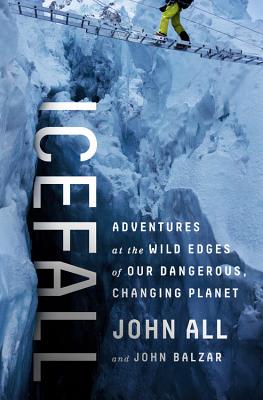 Adventures at the Wild Edges of Our Dangerous, Changing Planet

John All has survived encounters with black mamba snakes, run-ins with wild jungle animals, and a brush with death in an icy tomb. No one knows the outer limits of our changing planet quite like him.

In May 2014, the mountaineer and scientist John All plunged into a crevasse in the Himalayas, a fall that all but killed him. He recorded a series of dramatic videos as he struggled to climb seven stories back up to the surface with a severely dislocated shoulder, internal bleeding, a battered face covered in blood, and fifteen broken bones--including six cracked vertebrae. The videos became a viral sensation, an urgent and gripping dispatch from one of the least-known extremes of the planet.

Yet this climb for his life is only the latest of John All's adventures in some of Earth's most hostile climates. He has also been chased by a wild hyena, scaled Everest, and narrowly missed being hit by an avalanche, all in pursuit of his true calling: the study of how we can master the challenge of our world's changing climate. Icefall is a thrilling adventure story and a report from the extremes of the planet, taking you to collapsing Andean glaciers, hidden jungles in Honduras, and the highest points on Earth. In this gripping account, our changing climate is not a matter of politics; it's a matter of life and death and the human will to survive and thrive in the face of it.

Praise For Icefall: Adventures at the Wild Edges of Our Dangerous, Changing Planet…

"John All treads the delicate knife-edge between adventure and climate science in this gripping account of his work in some of the world's most dangerous and remote places. He makes a passionate and powerful case for human adaptation and resilience in the face of climate change. His optimism, from someone who has been there and done that, comes across loud and clear. In this book, climate change is not just politics-it's avalanches and huge snakes and getting lost in the desert. This book will make you see it in a new light."
--Brian Fagan, distinguished emeritus professor of anthropology, University of California, Santa Barbara, and author of The Great Warming
—-

"[John All] is one part climate scientist and two parts extreme mountaineer, with insights into what it's like to work at the exciting-and sometimes dangerous-intersection between the pursuit of knowledge and the hunt for adventure."
--Nate Blakeslee, author of Tulia: Race, Cocaine, and Corruption in a Small Texas Town
—-

"Sure, some science happens in labs, with devices and machines. But data is in the world, where scientists interact with it, where they dig it out. Humanity, if it is looking to survive the next century in anything approaching its current state, needs more data to survive, especially data from places that are themselves rare: deserts, glaciers, mountains, still-impenetrable forests. It's giving nothing away to say that somehow John All, a mountain-climbing data forager extraordinaire, survives, despite all odds. Which offers humanity some hope, stuck as it is in a dark, life-on-earth-threatening place."
--Robert Sullivan, author of The Meadowlands and My American Revolution
—-

"John All's passion for adventure is matched only by his sharp insight and deep knowledge of environmental science. This important book tells the story of one man's crusade-through jungles, over mountains, and deep into the ice-to bring about change that could save millions of lives."
--Carlos Buhler, winner of the American Alpine Club's Underhill Award for mountaineering
—-

John All is a Research Professor of mountain environmental science at Western Washington University. His research around the world has been funded by groups that include the National Science Foundation, USAID, the CDC, and the Fulbright Foundation. He is executive director of the American Climber Science Program, an organization of citizen scientists who have the ability to climb the world's tallest peaks and use these expeditions to gather crucial data on the changing climate. John is a Lifetime Fellow of the Explorers Club in New York City, a certified paraglider pilot, rescue diver, a rugby and volleyball champion, and he spent several years with search and rescue teams prior to becoming a professor.

John Balzar is the author of Yukon Alone: The World's Toughest Adventure Race, named a Los Angeles Times Best Book of the Year. His magazine work has been collected in anthologies including, Wild Stories: The Best of Men's Journal. A veteran newspaper journalist, he was awarded the Scripps-Howard Ernie Pyle Prize for human interest storytelling. He has sailed across the Pacific, worked as a river Boatman in the Arctic Wildlife Refuge and holds NOAA Science Diver certification.
Loading...
or
Not Currently Available for Direct Purchase