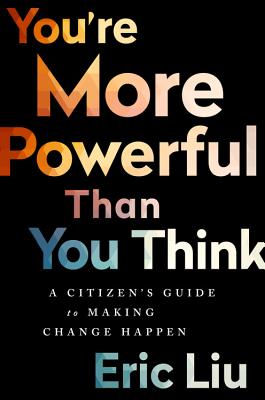 You're More Powerful than You Think

Is this the America you want? If not, here's how to claim the power to change your country.

We are in an age of epic political turbulence in America. Old hierarchies and institutions are collapsing. From the election of Donald Trump to the upending of the major political parties to the spread of grassroots movements like Black Lives Matter and $15 Now, people across the country and across the political spectrum are reclaiming power.

Are you ready for this age of bottom-up citizen power? Do you understand what power truly is, how it flows, who has it, and how you can claim and exercise it?

Eric Liu, who has spent a career practicing and teaching civic power, lays out the answers in this incisive, inspiring, and provocative book. Using examples from the left and the right, past and present, he reveals the core laws of power. He shows that all of us can generate power-and then, step by step, he shows us how. The strategies of reform and revolution he lays out will help every reader make sense of our world today. If you want to be more than a spectator in this new era, you need to read this book.

Praise For You're More Powerful than You Think: A Citizen’s Guide to Making Change Happen…

"Eric Liu has written a primer on power that is a call to active citizenship. His energy and optimism are infectious, just as his vision of power is contagious. Anyone who wants to make change, large or small, should absorb the message and master the strategies in these pages."—Anne-Marie Slaughter, President and CEO, New America

"There is no more pressing time than now to understand your own power and use it, and there is no better guide to doing so than Eric Liu. This book is a way of living, individually and collectively, in a changing America."—Jose Antonio Vargas, Founder and CEO, Define American

"At one point, Eric Liu writes 'power is a gift.' Well, this book is also a gift-especially for all those who want to understand the complex role power plays in our society, and their power to change it. By weaving together comprehensive analysis, compelling stories, and change-making strategies, Liu has created an essential guide for citizens seeking to understand and exercise their own power to make the world a better place."—Darren Walker, President, Ford Foundation

"You're More Powerful Than You Think lays out a clear, practical model for organizing that will be hugely valuable to a new generation of social and political activists--at a moment when the nation badly needs them."—E.J. Dionne, author of Why the Right Went Wrong: Conservatism - From Goldwater to Trump and Beyond

"Those who want a more sustainable and just future often feel powerless against big corporations and the 1 percent. After reading Eric Liu's book, I see we do have power; we just need to better understand and leverage it. Read this book and let's get to work!"—Annie Leonard, Executive Director, Greenpeace USA

"An important and needed update of the rules of community organizing in the Internet Age. But unlike Saul Alinsky's 'Rules for Radicals,' there is nothing cynical or manipulative in Eric Liu's vision. We may disagree on many policy specifics, but we agree that dispersed citizen power is the new normal, and that 'many smalls can surpass a few bigs.' This hopeful and essential book shows us how to take responsibility for our democracy."—Matt Kibbe, Founder, Free the People

"Eric Liu's new book is profound and elegant, wise and accessible. Right alongside his diagnosis of the problems are thoughtful, energizing solutions. Be prepared to understand your own political agency in a whole new light."—Ai-jen Poo, Director of National Domestic Workers Alliance, Co-Director of Caring Across Generations

"Many of us want to make change but don't know where to start. Eric's wide-ranging career proves he is a doer - and with this thoughtful, forthright, provocative work, he empowers us to be the same."—Brittany N. Packnett, Activist and Co-Founder of Campaign Zero

"This is a smart, insightful book about one of the most timely topics of our times: How to create change. With practical examples and keen analysis, Eric Liu offers sure strategies on how you can maximize your power, organize communities, reframe the narrative and change your world."—Lynn Povich, author of The Good Girls Revolt: How the Women of Newsweek Sued Their Bosses and Changed the Workplace

Eric Liu is the founder and CEO of Citizen University (citizenuniversity.us) and executive director of the Aspen Institute Citizenship and American Identity Program. He is the author of several books, including A Chinaman's Chance, The Gardens of Democracy, and The Accidental Asian. Eric served as a White House speechwriter and policy adviser for President Bill Clinton. He is a regular columnist for CNN.com and a correspondent for TheAtlantic.com.
Loading...
or
Not Currently Available for Direct Purchase