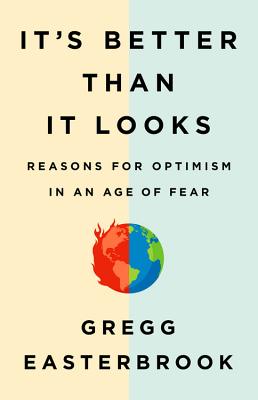 It's Better Than It Looks

Reasons for Optimism in an Age of Fear

Is civilization teetering on the edge of a cliff? Or are we just climbing higher than ever?

Most people who read the news would tell you that 2017 is one of the worst years in recent memory. We're facing a series of deeply troubling, even existential problems: fascism, terrorism, environmental collapse, racial and economic inequality, and more.

Yet this narrative misses something important: by almost every meaningful measure, the modern world is better than it ever has been. In the United States, disease, crime, discrimination, and most forms of pollution are in long-term decline, while longevity and education keep rising and economic indicators are better than in any past generation. Worldwide, malnutrition and extreme poverty are at historic lows, and the risk of dying by war or violence is the lowest in human history.

It's not a coincidence that we're confused -- our perspectives on the world are blurred by the rise of social media, the machinations of politicians, and our own biases. Meanwhile, political reforms like the Clean Air Act and technological innovations like the hybridization of wheat have saved huge numbers of lives. In that optimistic spirit, Easterbrook offers specific policy reforms to address climate change, inequality, and other problems, and reminds us that there is real hope in conquering such challenges. In an age of discord and fear-mongering, It's Better Than It Looks will profoundly change your perspective on who we are, where we're headed, and what we're capable of.

Praise For It's Better Than It Looks: Reasons for Optimism in an Age of Fear…

"Besides providing new ammunition for optimists, Mr. Easterbrook's aim in this important book is to identify what we've been doing right and to consider what we can do about the still pressing problems we face... Mr. Easterbrook wants to make optimism intellectually respectable again, and he has done so with cogent arguments and bountiful evidence."—Michael Shermer, Wall Street Journal

"'It's Better Than It Looks' makes many good arguments about inequality...Easterbrook is good on democracy and dictatorship (democracy is better at money and better at war). He is also good on climate change (the technical solutions are there, and all will be fine 'if society chooses reform,' though that choice is surely the crux of the problem)."—Angus Deaton, New York Times Book Review

"Easterbrook sets out to disabuse readers of any casual pessimism and equip them with enough facts and arguments to silence dinner parties from now till kingdom come... rich in detail and observation."—Philip Delves Broughton, Weekly Standard

"Countering the usual pessimism disseminated by the 'experts' and rebroadcast by the 'if it bleeds, it leads' media, 'It's Better Than It Looks' ably defends the view that the grand sweep of history has gone from generally bad to generally good for the vast majority of the world's populace. Whether the book surveys global food supply, infectious diseases, the natural system, the economy, violence, technology or governance, the overall outlook consistently comes up positive, according to Mr. Easterbrook. His impressive, rather objective, amply-referenced, perspicacious analysis supports his optimism."—Anthony Sadar, Washington Times

"Terrific...Easterbrook's core conclusions are compelling, and he writes with a journalist's flair."—Foreign Affairs

"An argument worth considering."—Kirkus Reviews

"America, like most of the world, has fallen prey to a false and destructive narrative: the belief that everything is getting worse. In this important and compelling book, Gregg Easterbrook sets the record straight. His refreshing analysis can restore our optimism and help heal our poisoned politics."—Walter Isaacson, bestselling author of Leonardo da Vinci

"It's Better Than It Looks is a welcome corrective to our fashionable pessimism that things are bad and getting worse, by providing a wealth of evidence that the reverse is true. Gregg Easterbrook is clear-eyed nonetheless in facing up to present challenges, and reminds us that there is always a way forward out of seemingly unsolvable problems."—Francis Fukuyama, Stanford University

"Gregg Easterbrook regrets to inform you that the future is a lot rosier than you've heard. Not only are things Not So Terrible, they are actually Quite Good-and Getting Better. The world's citizens are living longer, economies are expanding, and we produce more food than we can eat. He even suggests that our most intractable problems, like economic equality and climate change, can be ameliorated in our lifetimes. It's Better Than It Looks is anything but Panglossian. It serves up persuasive arguments mustered by a trenchant, erudite and consummately un-boring writer. Start reading - you'll become a believer, too."—Alex Beam, Boston Globe columnist

"I highly recommend that every college and university president purchase enough copies of It's Better Than It Looks to give to every one of their students...Understanding how the world has improved, and will improve in their lifetimes, may be amongst the most important things that we can teach them. It's Better Than It Looks is a good place to start."—Joshua Kim, Inside Higher Ed

"Easterbrook marshals the extensive evidence that things are getting better for most people in most areas of life-even as politicians of the left and (especially) the right push a false narrative of decline and 'carnage.' Chapters on how the world is meeting the challenge of climate change and why nature can never collapse are particularly strong... a strong, teachable, empirical case for optimism about why, to use the title of the concluding chapter, 'it will never be too late.'"—CHOICE

Gregg Easterbrook is the author of ten books, two of them New York Times Notable Books. He was a national correspondent for the Atlantic, and since then has been a contributing editor. He is a former visiting fellow of the Brookings Institution (dual fellowship in economics and in governance studies) and a distinguished fellow of the Fulbright Foundation.

He often writes for the Atlantic (nine cover stories), New Republic (seventeen cover stories), and New York Times (thirty-three op-ed pieces and counting). He has been a politics columnist for Reuters and a sports columnist for ESPN. He has written for the New Yorker, Science, Wall Street Journal, Wired, Esquire, Washington Monthly, and Los Angeles Times.
Loading...
or support indie stores by buying on