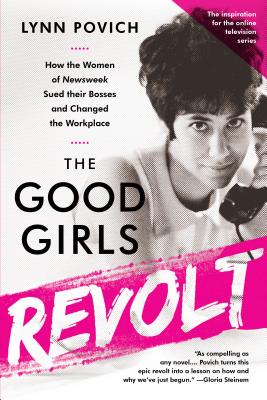 It was the 1960s -- a time of economic boom and social strife. Young women poured into the workplace, but the "Help Wanted" ads were segregated by gender and the "Mad Men" office culture was rife with sexual stereotyping and discrimination.

Lynn Povich was one of the lucky ones, landing a job at Newsweek, renowned for its cutting-edge coverage of civil rights and the "Swinging Sixties." Nora Ephron, Jane Bryant Quinn, Ellen Goodman, and Susan Brownmiller all started there as well. It was a top-notch job -- for a girl -- at an exciting place.

But it was a dead end. Women researchers sometimes became reporters, rarely writers, and never editors. Any aspiring female journalist was told, "If you want to be a writer, go somewhere else."

On March 16, 1970, the day Newsweek published a cover story on the fledgling feminist movement entitled "Women in Revolt," forty-six Newsweek women charged the magazine with discrimination in hiring and promotion. It was the first female class action lawsuit--the first by women journalists -- and it inspired other women in the media to quickly follow suit.

Lynn Povich was one of the ringleaders. In The Good Girls Revolt, she evocatively tells the story of this dramatic turning point through the lives of several participants. With warmth, humor, and perspective, she shows how personal experiences and cultural shifts led a group of well-mannered, largely apolitical women, raised in the 1940s and 1950s, to challenge their bosses -- and what happened after they did. For many, filing the suit was a radicalizing act that empowered them to "find themselves" and fight back. Others lost their way amid opportunities, pressures, discouragements, and hostilities they weren't prepared to navigate.

The Good Girls Revolt also explores why changes in the law didn't solve everything. Through the lives of young female journalists at Newsweek today, Lynn Povich shows what has -- and hasn't -- changed in the workplace.

Praise For The Good Girls Revolt: How the Women of Newsweek Sued their Bosses and Changed the Workplace…

"The Good Girls Revolt is as compelling as any novel, and also an accurate, intimate history of new women journalists invading the male journalistic world of the 1970s. Lynn Povich turns this epic revolt into a lesson on why and how we've just begun."—GloriaSteinem

"A meticulously reported and highly readable
account of a pivotal time in the women's movement."
—Jeannette Walls

"The personal and the political are deftly interwoven in the fast-moving narrative.... The Good Girls Revolt has many timely lessons for working women who are concerned about discrimination today....But this sparkling, informative book may help move these goals a tiny bit closer."—NewYork Times

"Solidly researched and should interest readers
who care about feminist history and how gender issues play out in the culture."
—Boston Globe

"Povich's memoir of the tortuous, landmark
battle that paved the way for a generation of female writers and editors is
illuminating in its details [and] casts valuable perspective on a trail-blazing
case that shouldn't be forgotten."

"[Povich]
strikes a fair tone, neither naïve nor sanctimonious.... Among her achievements
is a complex portrait of Newsweek Editor Osborn Elliott and his path from
defensive adversary to understanding ally."

"Women still have a long way to go, the journalist Lynn Povich rousingly reminds readers in The Good Girls Revolt, her fascinating (and long overdue) history of the class-action lawsuit undertaken by four dozen female researchers and underlings at Newsweek magazine four decades ago.... If ever a book could remind women to keep their white gloves off and to keep fighting the good fight, this is the one."—LieslSchillinger, New York Times

"Crisp, revealing.... [A] taut, firsthand account of how a group of razor-sharp, courageous women successfully fought back against institutional sexism at one
of the country's most esteemed publications."
—Washingtonian

Lynn Povich began her career at Newsweek as a secretary. In 1975 she became the first woman senior editor in the magazine's history. Since leaving Newsweek in 1991, Povich has been editor-in-chief of Working Woman magazine and managing editor/senior executive producer for MSNBC.Com.

Winner of the prestigious Matrix Award, Povich edited a book of columns by her father, famed Washington Post sports journalist Shirley Povich. She is married to Stephen Shepard, former editor-in-chief of Business Week and founding dean of the CUNY Graduate School of Journalism. They have two children.
Loading...
or
Not Currently Available for Direct Purchase