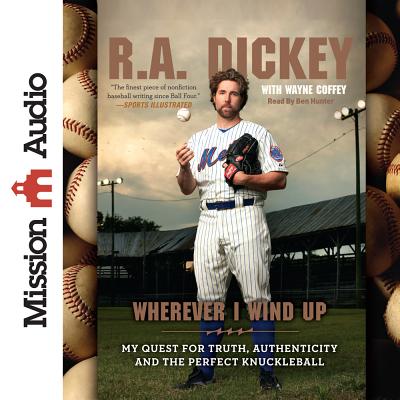 Wherever I Wind Up (Compact Disc)

My Quest for Truth, Authenticity and the Perfect Knuckleball

By R. A. Dickey, Wayne Coffey, Ben Hunter (Narrated by)

The Glass Castle meets Ball Four as Mets knuckleballer R.A. Dickey weaves searing honesty and baseball insight in this memoir about his unlikely journey to the big leagues. An English Lit major at the University of Tennessee, Dickey is as articulate and thoughtful as any professional athlete in any sport-and proves it page after page, as he provides fresh and honest insight into baseball and a career unlike any other. Fourteen years ago, Dickey was a heralded No. 1 draft choice of the Texas Rangers, only to have an $810,000 signing bonus, and his lifelong dream, ripped away by an X- ray-and the discovery that he did not have an ulna collateral ligament in his right elbow. Five years ago, he gave up a record six home runs in three innings to the Detroit Tigers-and was effectively consigned to the baseball scrap heap. Sustained by his profound Christian faith, the love of his wife and children, and a relentless quest for self-awareness and authenticity, the immensely likable Dickey details his transformation from a reckless, risk-taking loner to a grounded, life-affirming big leaguer. He emerged as one of the premier pitchers in the National League in 2010-and the knuckleballing embodiment of the wonders that perseverance and human wisdom can produce. Dickey views his story as one of redemption. Readers will come to see it as something more-a uniquely American story of beating back demons, listening to your heart, and overcoming extraordinary odds.
or
Not Currently Available for Direct Purchase
Copyright © 2020 American Booksellers Association